“It is such an amazing opportunity to be here, getting hands-on experience in the field and developing a social network with amazing researchers.”

NOT MANY STUDENTS CAN SAY the Pacific Ocean is their classroom. Fewer still spend their days studying along the shore in hip waders.

Why Zoology? UBC Okanagan undergrad Alea Stockton counts herself among the lucky few spending their fall semester at the Bamfield Marine Sciences Centre, a world-class teaching and research facility on the outer west coast of Vancouver Island.

Stockton is a fourth-year Zoology student and one of just 24 students taking part in hands-on fieldwork and research at the renowned facility, which is affiliated with UBC and four other universities. 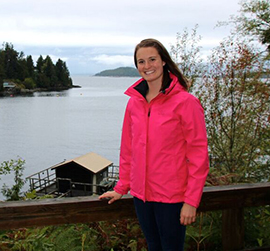 Students in the program spend half their days in class and the other half experimenting in the lab or on the ocean studying live organisms.

“When this opportunity came up, I jumped on it. I mean why wouldn’t I? It’s a once-in-a-lifetime thing,” Stockton says. “It’s one thing to see a picture or watch a video of an organism, but it’s another to watch it in action right in front of you.”

Stockton grew up in Yellowknife, thousands of kilometres from the ocean. But she spent her summers on Vancouver Island, where she developed a passion for the diverse sea life around it.

When it came time to select a university, UBC’s Okanagan campus was the natural choice. “I wanted a UBC education but thought the Vancouver campus would be too overwhelming. I toured the Okanagan campus and it was the perfect size and so gorgeous.”

Stockton also ran for the UBC Okanagan Heat’s cross-country team for several years, including 2013 when it won gold in the CCAA Cross-Country Running National Championship—the team’s first medal at the national level. Also that year, she competed in the Canada Summer Games in Sherbrooke, Quebec, where she won a silver medal.

“I have been fortunate in university and in high school to have had coaches who mentored me and kept me involved because I was never a star athlete. I just loved doing it and excelled because I loved it.”

LEARNING TO WIN (AND LOSE)

Stockton is modest about her sports achievements, which she credits with helping her to develop into a better person and student.

She says her first year at UBC was a difficult one spent learning how to study and achieve the grades she wanted, but she’s since won several scholarships and a place on the Dean’s List.

“Sports, and cross-country running in particular, taught me that it’s OK to fail sometimes—that it’s not the end of the world and you can still go on to be a great student,” she says. “My failures have humbled by success.” 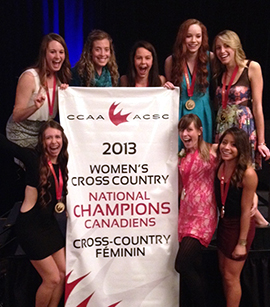 Stockton will return from the Bamfield Marine Sciences Centre to Kelowna to complete her last semester before graduation, but not until she’s completed a directed study that examines ways to increase the burrowing efficiency of geoducks, a large edible saltwater clam with a high mortality rate.

“It is such an amazing opportunity to be here, getting hands-on experience in the field and developing a social network with amazing researchers.”