UBC OKANAGAN BIOLOGIST Deanna Gibson has loved science since she was a young girl in Red Deer, Alberta. And that quest for knowledge has been burning inside of her for as long as she can remember.

Why Microbiology? However, it wasn’t until Gibson’s first year of college that she became curious about microbes—microscopic single-celled life forms such as bacteria. Her real turning point was in a third-year microbiology class.

“My professor, Ed Ishiguro, made me see things in a totally different light,” she says. “I understood from that moment that I knew nothing, that there was so much to learn, and that I wanted to live up to the challenge of solving some of life’s greatest infectious disease problems.”

Today, Gibson and her team—consisting of three PhD, three MSc, and three BSc students and one post-doctoral fellow—are involved with microbiome research, evaluating factors that influence the growth of microbes in mammals.

Conducted at Gibson’s Microbiome and Inflammatory Disease Research Laboratory, this work may lead to new therapies for chronic inflammatory diseases such as inflammatory bowel disease, diabetes and obesity.

Inspired by her own pregnancy, one of Gibson’s research areas focuses on infant nutrition and the consequences to intestinal health.

“We think that maternal nutrition and the first six months of life of a newborn may influence many immune diseases later in life depending on which microbes are present in the gut. If this research hypothesis is true, then understanding what dietary factors pregnant women and neonates should or should not be exposed to is critical for maternal and neonate health.”

To investigate, Gibson and her team collected stool samples from babies, and were puzzled by how much variation and different types of bacteria were present in the samples. (The samples were used to measure gut microbes.) She attributes this to how it was collected.

“We found there was a huge difference in how the stool was collected and prepared,” says Gibson. “For example, some individuals froze it right away and others didn’t.”

Known as a study effect, this discrepancy made it difficult, if not impossible, to analyse the data. Gibson undertook writing a research paper about the effects of stool storage and processing.

“Although this seems intuitive, no one had thought about it before. Our findings highlight how important it is to collect samples consistently. This study will have the global impact of making the data more meaningful.”

In related work, Gibson—in collaboration with colleagues at UBC’s Vancouver campus—published research findings demonstrating that gut bacteria are linked to the onset of Type I diabetes. Their findings also show that long-term and over-use of antibiotics can accelerate the process by disrupting gut bacteria.

The study, which looked at diabetes-onset in mice, demonstrated that those susceptible to diabetes had more harmful and less beneficial bacteria than those resistant to the disease.

“We were able to establish a clear relationship between bacteria, the body’s immune reaction and the development of Type 1 diabetes,” says Gibson. “This is likely to have significant implications for treatment of the disease.”

Recently published in the Nature Group’s ISME Journal, this research was supported by the Child and Family Research Institute Diabetes Catalyst Grant from the Canuck’s Foundation, the Canadian Institutes of Health Research, the Juvenile Diabetes Research Foundation, and the Natural Sciences and Engineering Research Council.

“We have a competitive chance to impact people’s health,” Gibson says.

“My team and I are developing an understanding of how much is too much in our diets. We can understand how our food works for us. We can control, to an extent, what we eat and thereby how we feel.”

While it’s true that professors teach in a classroom setting, Gibson’s time is also spent in the lab, mentoring undergraduate, graduate and post-doctoral trainees.

“This training is critical to the success of the research and it is the trainees who drive it forward,” she says. “While each student is unique and therefore requires a unique set of training, I tend to stick with two philosophies: lead by example and allow them to learn by doing.”

“I wanted to live up to the challenge of solving some of life’s greatest infectious disease problems.” 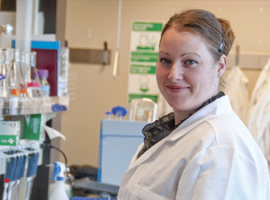 Among her other research interests, professor Deanna Gibson investigates how fats measure up in gut health.

“We tend to vilify fats,” she says. “Especially those that are saturated, such as butter.

“Our research has actually shown that some of these fats are protective in inflammatory diseases such as colitis, Crohn’s disease, and inflammatory bowel disease (IBD).”

For those suffering with gut issues, who are already on a restricted diet, Gibson says they might be nutritionally deprived and should not avoid fats.

Fats, she explains, are essential for the body, including such tasks as hormone production and brain function. Her study also shows that the fats we typically identify as healthy—polyunsaturated fats, found in nuts, seeds, etc.—actually irritate the already inflamed bowel.

“Saturated fats aren’t toxic, they actually help with healing. My recommendation of the ideal diet for those with and without IBD is to include olive oils, some saturated fats and a little fish oil.”

Story by May Li & Christine Zeindler