“As soon as I decided that I was an artist, it was now my prerogative to dive into everything art. Immediately, all the people who have anything to do with art are within my scope…I want to connect with people who are making art, and connect others in the community.” 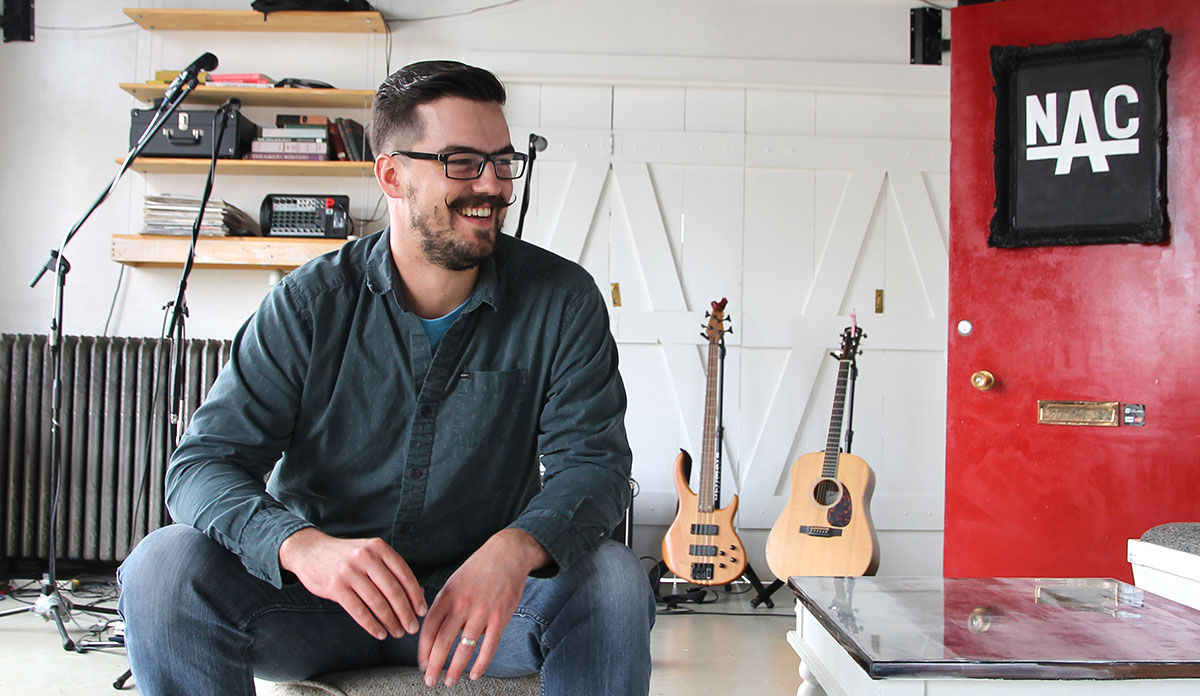 BEING ABLE TO HAVE A DEDICATED STUDIO PRACTICE is a goal of many artists.

Dylan Ranney, a Bachelor of Fine Arts alumnus, has made this dream a reality for himself and many of his fellow UBC Okanagan graduates.

Learn more about Visual Arts Dylan, along with one of his fellow alumni and now wife Liz Dumontet (Ranney), opened up the New Arts Collective last year. The NAC is a contemporary arts facility in downtown Kelowna that offers studio space, workshops and events for the local community.

In addition to running the studio and having an active art practice, he works as the preparator at the Kelowna Art Gallery, performs drums in five bands, and spends his time working, making art, recording music and touring—all the while being part of a family of three, soon to be four.

FROM ENVIRONMENTAL SCIENCE TO ARTISTIC EXPRESSION

It’s not the path Dylan imagined he’d be taking. He started at UBC Okanagan in 2009 as an Environmental Science student. For one of his electives, he chose a first-year drawing class in the Faculty of Creative and Critical Studies with then-professor Jim Kalnin and instructor Shawn Serfas. This elective changed everything. The next year, Dylan switched to the BFA program.

“Jim made me connect with myself creatively in a way I had not been able to do before. And Shawn convinced me to pursue being an artist. I gained a voice for myself visually during my time at UBC Okanagan.”

In the last year of his studies, Dylan had completed the majority of his program requirements and was able to dedicate his time to his studio practice. He worked with Art History and Visual Culture professor Hussein Keshani as his supervisor for his advanced studio practices course.

Hussein helped him to think more academically about his creative work and showed him the importance of having context in his work.

“I have learned how to think about art, how to interpret my own creative mind and that helped us envision the collective. We now have a piece in the game, we can have an influence in this community as people who are dedicating ourselves to art.” 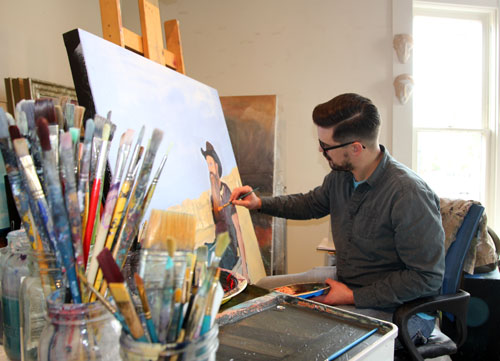 UBC Okanagan was the first platform that sustained his artistic practice and encouraged it to grow.

At the time of graduation, Dylan remembers feeling that Kelowna was a bit dry with spaces for artists. It took a bit of digging, but he found a home to continue his studio practice. In 2013, Dylan and Liz started as some of the first resident artists for heART School, the space that is now known as the New Arts Collective.

After living in Mexico for six months, returning to Kelowna and managing the Streaming Café, they both needed studio space and moved back into the heART School. Dylan and Liz took over the space when the lease came up in 2017.

“I could not imagine this going back to an office space. I felt it needed to stay an active creative space and remain a community creative hub in downtown Kelowna,” notes Dylan. “There is something sacred about this place, we are not trying to just make money, but create culture and to grow as artists in a supportive art community.”

Dylan and Liz dedicated many hours to revitalizing and running this space studio in downtown Kelowna, which is home to 13 artists. These artists are now able to have a dedicated space to create, a classroom space to invite others to come learn and practice with them, and a recording studio for musicians.

Nicole Young, a BFA alumna from 2015, is one of the resident artists in NAC. Nicole uses her space to create new work, as well as teaching a variety of workshops and classes.

“I used to work from home, and while there are a lot of benefits to having a home studio, it can be a bit isolating. Being part of a community of like-minded artists that I’m able to bounce ideas off of really helps to inspire and motivate my process. Liz and Dylan have done a really great job of making the space feel professional but unpretentious.”

Dylan, part of the BC musician’s touring circuit for 15 years, is a ‘people person’ and he loves socializing with artists. He is passionate about music and is happy that the New Arts Collective has been the venue for several intimate concerts and is place for artists to perform when they are travelling through town.

“I have always seen an intersection between visual art and music, all creative expression is connected. I want to connect with people who are making art, and connect others in the community. People motivate my art and my actions.”

There is so much to learn, and so many directions to grow in with so many opportunities for artists in Kelowna, including the one created by Dylan and Liz in the New Arts Collective.