“I love my job. The work is driven by conservation efforts, which is important to me. It’s work you can feel good about.” 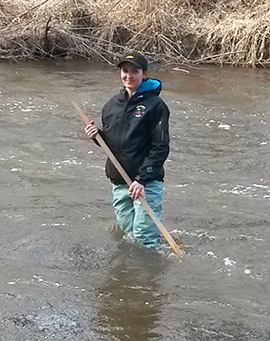 
As a fisheries biologist for the Okanagan Nation Alliance, alumna Elinor McGrath focusses on habitat restoration

WILD SALMON ARE ICONIC WEST-COAST CANADIAN ANIMALS. Their migrations can stretch from the Alberta border to the Pacific Ocean, to Alaska and the Bering Sea, even as far as Japan. Why Earth and Environmental Sciences?

But of the five BC salmon species that used to comprise Okanagan stocks, only one—Sockeye Salmon—is common these days in BC’s Southern Interior. Chinook Salmon and Steelhead still exist but their populations are struggling.

The mission to restore the region’s salmon runs is a central goal for the Okanagan Nation Alliance (ONA), which UBC alumnus Elinor McGrath has been working for as a fisheries biologist in West Kelowna for more than five years. 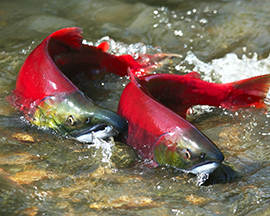 Of the five BC salmon species that used to comprise Okanagan stocks, only Sockeye Salmon is common these days in the Southern Interior.

The ONA undertakes to restore Okanagan salmon habitats that have been decimated by human alteration of natural stream channels.

“Fish populations in the Okanagan are amongst the most impacted in the province,” says McGrath. In respect to salmon, she explains that urbanization, water withdrawals and low stream flows, loss of wetlands for juvenile rearing, and aggressive river channelization such as the straightening of the Okanagan River for flood control and agriculture are some of the main reasons for habitat degradation in the Okanagan.

The restoration of those ecosystems is paramount to the health of streams and flora, which in turn boosts fish populations. “Restoring salmon runs brings marine nutrients back to this area, which contributes to healthier ecosystems that produce more fish,” McGrath says. “It’s important to make that connection: It benefits everyone.”

It’s not easy work, but it is fulfilling, she says.

“I love my job,” McGrath says of the mix of hands-on and collaborative efforts, and the balance of office and fieldwork.

“All of my work is restoration-focused and driven by conservation efforts, which is important to me. It’s work you can feel good about.”

McGrath lauds the ONA’s traditional and cultural practices, which reflect a deep understanding and respect for nature.

“The Syilx culture, views and relationship to nature is inspirational,” she says. “The Okanagan Nation Alliance doesn’t just view wild fish stocks as resources; their commitment to habitat and salmon restoration and conservation signifies deep underlying values of taking care of the land and maintaining strong reciprocal bonds within the broader ecosystem.”

Salmon repatriation—for example, the success of the ONA’s kł cp̓əlk̓ stim̓ Hatchery in Penticton with Sockeye Salmon—is supported through diligent efforts to improve fish passage at dams, says McGrath. These have led to a recovery of the Okanagan Sockeye population to allow a food fishery, which is aiding restoration of Indigenous food systems in the area.

The Sylix (Okanagan) Nation’s three-day public salmon feast every fall is an essential annual tradition. Since 2010, UBC Okanagan takes busloads of Aboriginal and international students to the event, which features traditional performances, a canoe paddle, games, feast, and ceremony to honour the Okanagan River.

OK IN THE VALLEY

Raised in Germany, McGrath moved to Canada with her Regina-born husband and completed her undergraduate degree in geography at the University of Calgary. After working for an environmental consulting firm for several years, she sought out MSc studies that combined interesting and meaningful research. She found just that in the work of UBC professor Adam Wei, a forest hydrologist, and the two hit it off. (Wei describes her as “a smart and hard-working student who is passionate about learning.”)

With Wei and professor Craig Nichol (a UBC hydrogeologist), McGrath worked on a research project that partnered UBC Okanagan with the Pacific Salmon Foundation’s Fraser Salmon and Watersheds Program, in collaboration with various levels of government agencies and local First Nations organizations. The project focused on surface water and groundwater interactions and how they affect fish habitat in Fortune Creek in the north Okanagan.

McGrath has special praise for professors Wei, Nichol and Bernard Bauer. “They were super helpful,” she says. “It was a friendly, relaxed and informal atmosphere between students and supervisors. Their doors are always open.”

Nichol says her project showed that stream temperature is a critical parameter affecting Interior salmonid stocks, with temperatures in many streams exceeding safe levels due to low flows and the removal of bankside vegetation. “Elinor has continued to work on similar issues after graduating,” he says, “and she developed a new, management-focused, statistical method for assessing stream temperatures that will help water managers make good decisions around stream flows and stream temperatures.

“With Elinor’s strong analytical skills, good people skills, and the efforts of the whole team at the Okanagan Nation Alliance, I think things will be looking up for Okanagan salmonids in the years to come.”

Now, among many other things, McGrath participates in technical working groups on West Coast BC fisheries management and salmon conservation. She continues to work with UBC experts on collaborative research projects.

“Elinor is a terrific example of a student transitioning to practicing professional, and her success reflects very well on UBC Okanagan,” Bauer says. “She is a key resource for the Okanagan Nation Alliance. She represents them extraordinarily well in meetings with government and community groups such as the Wilsey Dam Fish Passage Committee, for which she leads the scientific agenda.”

McGrath loves the work and the opportunity to stay in the Okanagan.

“A lot of other graduates have stayed here, too, which is nice. They’ve stayed in the valley and they’re doing important work.”