IN THE BRAIN, a number of suspects may contribute to the death of a nerve cell: the star-shaped cells called astrocytes, the willowy, thin oligodendrocytes, and the oval microglia.

Chemist Fred Menard is looking at questions about chronic disease in ways few others can. He is developing molecular probes and biologically compatible reactions to study these living systems and how they are influenced by nerve-cell phenomena.

An assistant professor at UBC’s Okanagan campus, Dr. Menard along with his colleagues is drawing attention and interest to the field of organic chemistry that might otherwise seem inaccessible.

As a presenter at UBC Okanagan’s 2014 Nobel Night Menard explained, “Synthetic chemists, like myself, can create new molecules to help scientists investigate biological mysteries at a molecular level. This science opens up whole new realms of possibilities.“

At Nobel Night, distinguished UBC professors discuss the year’s Nobel Prize-winning contributions, exploring the what, how, and why of the world’s big discoveries and ideas.

FROM GRADE SCHOOL TO GRAD SCHOOL

Even as a child, Menard had an inquisitive approach to science.

“When I was a kid, I always wanted to be a scientist with crazy hair, wearing a white lab coat. For Christmas I received a chemistry set; I didn’t completely understand what chemistry entailed, but I knew it would be fun.”

From elementary to high school and university, the science bug hit its mark. Menard enjoyed sciences throughout and specifically focused his university courses: “I discovered a love for organic chemistry because it’s a visual science. It is easier to see molecular structures than describe them.” He admits he’s a very visual, attention-to-details person.

It was during the summers in the absence of the science courses he loves that Menard came to the conclusion that he’d prefer to be a scientific investigator.

“I wanted to contribute ideas and be part of a team that makes decisions. I realized this takes a lot of knowledge and experience, and so I went to graduate school.”

During graduate school he learned how to crack the code of organic synthetic chemistry, from recreating natural molecules in the lab, to making reactions more efficient and generating less chemical waste. In one project he helped develop a procedure to synthesize a plant-derived molecule called withaferin A, which has anti-cancer activity.

Working with Sherbrooke University professor Pierre Deslongchamps, Menard was able to synthesize the compound, allowing its drug-like properties to be studied in detail.

In the Menard Lab, a team of nine students now focuses its research on designer chemical probes that help investigate the process of nerve-cell degeneration. Although Menard’s work is largely chemical, he works closely with other investigators in other fields to uncover the factors in this process.

“We need to step outside our field and talk with colleagues in other disciplines. Our tools are chemical, but the questions are biological.”

The point of contact between two nerve cells is called a synapse and it is through this connection that information—or, thought—is relayed. Once the synapse breaks down, so does this communication. It is this specific process that interests Menard.

“We are trying to understand how the breakdown happens in diseases, such as Alzheimer’s and Parkinson’s, so we can stop it.”

Menard’s team is looking at the contributing role of the astrocyte, a cell that wraps around and supports the synapse. What they don’t know is if this cell is friend or foe. Only through developing chemical tracers will they know for sure.

“These cells haven’t been investigated in depth yet,” he says. “And we are one of the few groups in Canada that are using chemistry to study astrocytes.”

The novelty to this work is that synapse elimination can potentially be viewed in real-time, thus catching the instigator in the act. Menard’s dream goal is to be able to deliver a chemical spy that can be switched on or off with different wavelengths of light to expose the cells involved.

“I’m hopeful this research will ultimately contribute to a cure for neurodegenerative diseases, which is a global health issue.”

Menard, who hails from Quebec, is enjoying his role at the UBC Okanagan campus in Kelowna—and its proximity to freshwater lakes. “I’d never live far from a body of water.”

On dry land, Menard embraces the benefits of the close-knit Okanagan campus. “It’s a new campus and we get to build something fabulous and I get to part of this ambitious project. The campus is independent and there are many opportunities for new investigators.”

Menard’s connection is strong with collaborators and students. Not only does he mentor trainees in the lab, he also helps organize the Three Minute Thesis (3MT) competition, which challenges graduate students to compellingly summarize their research in three minutes.

“My goal is to help students grow as independent researchers. I want to enable their dreams.”

He feels this can be accomplished best at UBC Okanagan.

“The greatest advantage of this campus is that the students feel a sense of belonging. Consequently, they take their projects seriously and they do well—it’s self reinforcing.

“Here, students have a great quality of life, get a degree from a world-class institution at a collaborative, interdisciplinary campus.”

“My goal is to help students grow as independent researchers. I want to enable their dreams.” 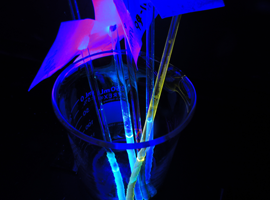 Imagine having only three minutes to present your life’s work thus far. This is the challenge many UBC graduate students willingly sign up for.

The Three Minute Thesis (3MT) competition, which originated at Queensland Australia, has generated a bit of a following at the UBC Okanagan campus. Winning brings its own prestige.

The 3MT program allows a maximum of three minutes to explain the depth and significance of research to a lay audience and a panel of judges. It’s promoted on campus as, “One slide. Three minutes. $2,000 in prizes.”

“This fosters effective presentation and communication skills, which is essential for successful and burgeoning scientists,” says Menard.

Students compete, locally, regionally, and nationally, with the event culminating in an international contest, the Universitas 21 competition. UBC was one of the first universities in Canada to host a 3MT.

“This should almost be a mandatory exercise,” says Menard, who enjoys supporting students to search for meaning in their work.

“Participating in this competition gives important communication skills to the students. This can’t be learned from a textbook.”