SHE WHO
WEARS THE
IRON RING

NO ONE IS MORE SURPRISED than Heather Mallory that she has become a civil engineer.

Through a twist of fate, mettle, and hard work, not only did the 26 year old accept the Obligation of Canadian Engineers, receiving the symbolic iron ring, she will graduate this year as one of the most influential and passionate student leaders the School of Engineering has ever produced.

Mallory has been extensively involved in numerous roles with the Engineering Undergraduate Society (EUS) at UBC’s Okanagan campus. She’s also a senior representative for Women in Engineering (WIE), which provides professional networking, career development, and social events for female students.

“I am very passionate about getting women into the STEM [science, technology, engineering, and mathematics] fields,” Mallory says. “Women have a lot to bring to the table. We need to be out there in the fields, making decisions, and influencing industry.”

The Women in Engineering committee ensures female students on campus have a support network, and every year brings about 60 Okanagan high-school girls to UBC for the day to introduce them to engineering.

“It’s really awesome to see the transformation in the high-schoolers as they move through their day. They come in a little shy, but by the time they leave you can tell they’re fired up and excited about the possibilities.”

“Women bring a diversity of opinions, creativity, provide balance to a workplace, and are keenly aware of the social and environmental impacts of engineering design,” Dr. Sadiq says. “Women are a major force in our society and play an essential and vast role in the solution of human problems.”

Mallory arrived at the School of Engineering at UBC’s Okanagan campus through serendipity. In high school she earned a scholarship for business, but shortly before she was supposed to embark on a business degree, she realized her heart was elsewhere. Then her dad helped her find a job working in a company that sold geosynthetic materials.

“At that point I don’t think I even understood what an engineer was,” she says. “But then I started answering phone calls from engineers, interacting with industry, and learning a bit about what they did.”

On a whim, she moved to Kelowna from Chilliwack. “It was a scattered period of my life. I just sort of thought, ‘I’m going to go back to school. What should I take? Engineering? Why not?!’ ”

Mallory struggled academically in her first year, but enjoyed the engineering program and its people.

“That first year here was my hardest, for sure. But being part of the engineering program was awesome. The faculty and staff really supported me. Teachers were totally available anytime I had questions or needed help.”

During that time, Mallory found herself volunteering with the engineering sorority on campus, connecting her with the EUS, which led her to Women in Engineering. Next thing she knew, she went from attending events to organizing them.

“I like to be involved,” she says. “It’s not that I set out to be a leader. It was just a matter of being at the right places at the right times and meeting the right people.”

Mallory has devoted countless hours introducing young women to engineering and ensuring systems are in place to support them. She says motivation comes from her own experiences in the discipline, such as fieldwork in Fort McMurray, and her family.

“I have three younger sisters, so I think that’s partly where my passion comes from. Plus, now that I’ve seen how much potential and opportunity an engineering degree provides, I just think it’s so important for young females to realize this is a real option for them.

“Thanks to engineers like Heather Mallory,” he says, “more girls and young women are being exposed to engineering and encouraged to embrace technology in the same way as their male counterparts. Today more than ever, women can build successful careers in the STEM fields.

“The engineering profession is evolving as more women enter and work their way up through the workforce,” he says, adding that it’s an exciting time to be an engineer.

“Opportunities are extensive in all engineering disciplines. There are currently more jobs in engineering and technology than in any other profession, and most of these high-tech jobs are high-paying, as well.”

Mallory has completed three work terms in Fort McMurray and is considering returning there to start her post-university career, although she’s open to other professional options.

“It’s pretty awesome to know I’m going to get a job after graduation,” she says. “It’s not if, it’s when. There is a ton of jobs out there for engineers.”

For Mallory, the right career will include an opportunity to continue her outreach work with women and engineering. “It’s something I’ve been thinking about a lot lately. I don’t know how I am going to incorporate it, but I’ll find a way.”

Mallory reflects on her undergraduate experience as a whirlwind of activities, events, surprises, challenges, and successes.

She had a gruelling seven-class schedule one semester, and completed seven exams in nine days at another point. “I worked my butt off. I still don’t know how I got through it,” she says.

“The biggest surprise for me is how much I can take on. Coming into this program, my only expectation was to pass. But it’s amazing how much opportunity there is on this campus. There’s a lot of room to grow. I grew in ways I never expected.” 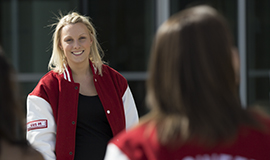 With three work terms in the northern Alberta oil patch of Fort McMurray, Heather Mallory knows firsthand what it’s like to be a female engineer in a traditionally male-dominated industry.

“At the start, I had no idea where Fort McMurray was or what I was getting myself into,” she says.

“I’ll never forget my flight up there: I was on this tiny little plane, packed full of men, and this rough old guy beside me gave some advice. He leaned in close and in a gruff voice said, ‘Don’t go outside by yourself at night.’ ”

Mallory spent eight safe months in Fort Mac during her first work term as a geotechnical monitor on the construction of an earth dam.

“I got a taste of being out in the field, working shift work, and learned a ton of things. I worked constantly—12 hours, reverse short-change shifts—but also had a lot of fun.”

Mallory says her jobs were enjoyable for different reasons.

“I got to spend time in an electric shovel this summer. I’ve driven around in the mine multiple times. But it was also fun because of the people I got to work with. I made a lot of lifelong friends from all over Canada.” 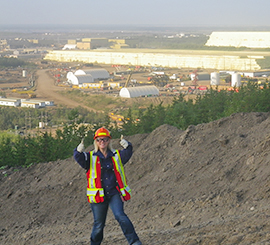