Director of the Centre for Mindful Engagement

Senior Faculty Advisor to the President

Master of Arts, University of Manitoba (1993)


“Our words and actions as teachers shape our students’ minds and hearts. This is a heavy responsibility.” 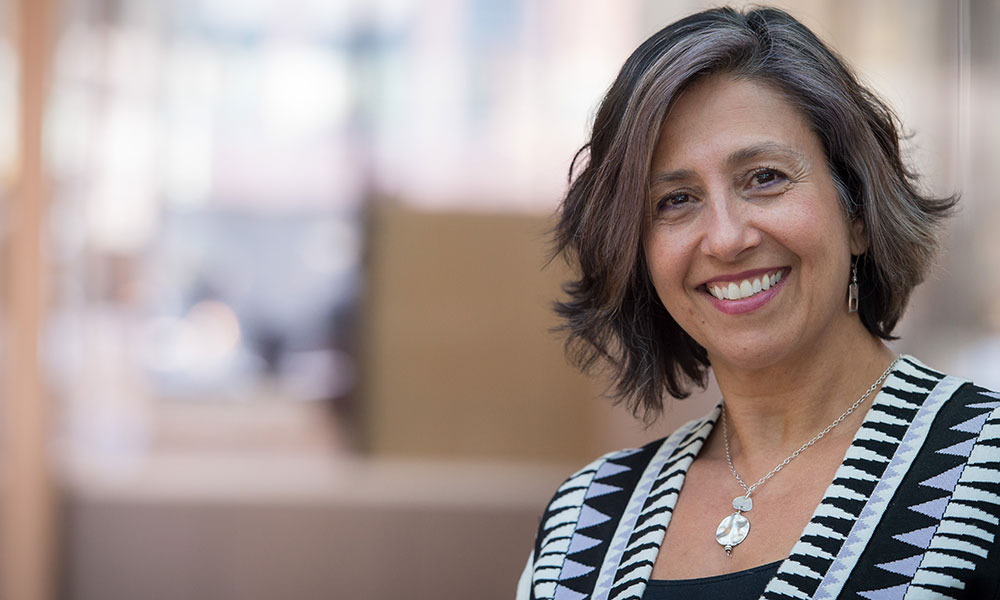 KAREN RAGOONADEN HAS EMBODIED EXCELLENCE IN TEACHING — and her students have noticed her mastery of the craft. In 2020, one of her graduate students nominated her for the Teaching Excellence and Innovation Award.

“Excellence in teaching cannot be taught,” reads her nomination letter. “Dr. Ragoonaden developed her mastery based on theory, awareness and feedback. Her successes are attributable to her hard work, persistence and dedication.” Ragoonaden went on to receive the 2020 award, which recognized her dedication to making a significant impact on the culture of teaching and learning.

Ragoonaden would be the first to say that teaching is one of the most rewarding professions to pursue — but it takes a lot of time and effort.

“Our words and actions as teachers shape our students’ minds and hearts. This is a heavy responsibility,” she explains.

Find out more about Education Coming from a family of teachers, it was almost no surprise when Ragoonaden began her teaching career early in life. At 19, she taught private adult French lessons part-time while attending university.

“I really enjoyed it and decided I wanted to teach in the public-school system,” she explains. “Following my undergraduate degree, for five years I taught French immersion middle and high school students social sciences, theatre and English. I loved it.”

As Ragoonaden reflects on her time teaching in Montréal and in Winnipeg public schools, she shares a story that resembles the tale of David and Goliath.

“This group of grade 11 kids — they weren’t a traditional academic group,” she says with a smile. “So I was exploring different ways to engage them in course content and community building with the aim of graduating in Grade 12.”

Ragoonaden recalled an annual drama competition she participated in during her high school years. Thinking back on that time fondly, she decided to try to use the competition to engage and motivate her students during their theatre class.

“We developed and wrote a play together. We made costumes. We practised! And finally, we went to the drama competition and they won! It just meant so much to that group because they hadn’t always felt successful in the traditional academic route.”

Ragoonaden credits her own early experiences of being an outsider as the reason she’s able to relate to students. Her family moved often while growing up — living in England, Ireland, Mauritius and Canada. Her parents were committed to giving her and her brother as many opportunities as possible.

“My father was Mauritian of Indian descent and my mother is Irish. I was born in England, but it was very challenging for my bi-cultural parents to live there,” says Ragoonaden. “Even as a young child I could feel racially-charged tensions in the UK.”

Ragoonaden enjoyed her time teaching in public schools, but it wasn’t long into her teaching career that she felt the pull to attend graduate school.

“My father was a history professor and he always said that for us to be truly independent and autonomous, to fight against prejudice and discrimination, my brother and I needed an education,” explains Ragoonaden. “For my family, education was a way to attain economic and social mobility. I realized if I really wanted to make a change, I would have to pursue graduate work.”

SEEKING EQUITY FOR ALL

At the University of Manitoba, Ragoonaden completed her master’s thesis in eighteenth century French Literature. Her thesis focused on ‘Paul et Virginie’ by Bernardin de Saint-Pierre; set in Mauritius, the novel depicts an interracial love story between an African man and a French woman.

“It was one of the first novels in French literature that involved an interracial couple,” says Ragoonaden. “The island had been uninhabited until Dutch, French and British explorers opened up sea-faring trade routes and developed sugar cane plantations. To work the plantations, indentured labourers from India, China and Africa were brought over.”

The novel had deeper connections for Ragoonaden, though. Her great-grandfather immigrated to the island from Southern India.

Following her master’s degree, Ragoonaden naturally fell into pursuing her doctorate. She attended the University of Montreal for her PhD in education; her research focused on online collaborative teaching and learning.

“An overarching aspect of my research focused on equitable online practices for marginalized French language populations. This included developing policies and pathways to ensure that higher education is available and accessible to all,” says Ragoonaden. “We were looking at the French language supports that are in place for adult populations in challenging contexts.” 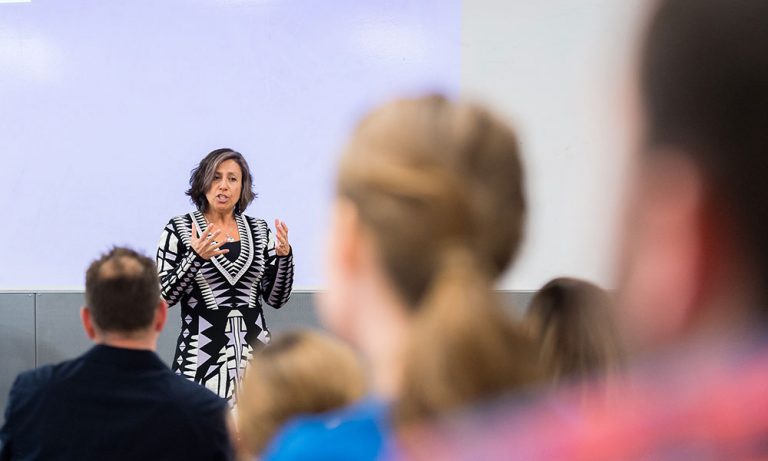 While working on her PhD, Ragoonaden received a sizable research grant from Fonds formation chercheurs et aide recherche (FCAR). The grant meant a return to l’Université de Saint-Boniface to work with Dr. André Samson, where their research focused on supporting francophone women as they accessed the necessary competencies and qualifications to enter the workforce.

“We looked at delivering online first-year university courses to francophone women across the province,” says Ragoonaden. “At the time we called it distance education and we actually mailed the course material and textbooks to their homes. We didn’t have the ability to put these modules online. To create community, we would phone and email students, and we developed online communities. In year two of the research, we expanded the program internationally and attracted women from France, Sénégal and Mauritius.”

After the birth of her three daughters, Ragoonaden completed her PhD in 2001. Three years later she started her university career at the Okanagan School of Education (during its transition to UBC Okanagan), where Ragoonaden conceptualized and developed the French immersion program for delivery in UBCO’s Bachelor of Education. In recent years, her research has primarily focused on culturally responsive teaching methods, with an emphasis on equity, diversity and inclusion in educational practices.

“Seeking equitable opportunities and educational access for all is at the crux of my research,” says Ragoonaden. “It’s about contributing to a civil and sustainable society and addressing all forms of inequities relating to race, gender, sexual orientation and all aspects of intersectionality.”

“It’s important to recognize our privilege as teachers, educators and professors and to use that platform to speak out against systemic racism and inequities in institutions and to collectively come to action. The progressive movement that began with the Truth and Reconciliation Commission in 2015 has come to a head in 2020 with the Black Lives Matter and antiracist discourses that have engulfed our societies. Our challenge now is to define pathways which support these movements, calling for an end to discriminatory and biased practices.”

“We revised and operationalized the curriculum so that the wellness practices would be accessible in both post-secondary and Kindergarten to grade 12 contexts,” says Ragoonaden.  “Now known as smartEducation, its many derivatives include smartNursing and smartUBC.”

In one of her more recent studies, Ragoonaden connected with teacher education students who voluntarily attended eight mindfulness-focused sessions on campus and followed guided practices at home over the course of nine weeks. At the end of the pilot, the students reported improvements in being less judgmental and less reactive towards thoughts, feelings and emotions of others, and in particular, themselves.

“We’ve found that when individuals are practising mindfulness consistently it positively influences their mindset,” says Ragoonaden. “It really demonstrates to people that you have the ability to make changes by paying attention to your thoughts and emotions.”

On a personal level, Ragoonaden found that the practice of mindfulness challenged her to revisit how she worked.

“Mindfulness practices are about developing presence, attention and focus. I found when I started researching and practising it, I began to move away from the multitasking that I had always done throughout my career,” says Ragoonaden. “I came to a deeper understanding about the flow of my emotions and its impact on my physical self and my intellectual self. I learned to pause, to slow down and mostly, to listen.”

When Ragoonaden takes some time to slow down, she practises what she researches.

“I engage in a combination of formal and informal mindfulness practices,” says Ragoonaden. “I meditate, but not every day; just when it feels right. I try to balance my work with a number of mindful practices. I bike, hike and do yoga thoughtfully and intentionally. I also love being in nature with my trusty Saint Bernard, Milo.”