THE BALL’S
IN HER COURT

A SELF-CONFESSED ‘NERD FOR SCHOOL’ is playing co-rec basketball in the gym one day. She’s kind of shy, kind of goofy, new to the Okanagan. Works a part-time job in personal finance while taking a heavy course load in the Faculty of Management.

The Maritimer is barely 20 years old but already her hoops career is mothballed. On the University of Prince Edward Island squad the year before, she took a charge and slammed the back of her head on the court: Concussion.

There were headaches, whiplash, fatigue. Then she had a seizure in class. In the middle of a presentation, just collapsed to the floor. The doctor ruled out epilepsy, prescribed rest and time.

The former UPEI Panther, Laura Marcolin, was now rested and still had game. Here she was, making shots, quarterbacking a pick-up basketball game in the gym at UBC’s Okanagan campus. Little did she know she was being watched from the sidelines by women on the Heat’s basketball team.

Marcolin’s journey to UBC Okanagan from UPEI began with a cross-country road trip with her mom, Barbara, a university professor who was moving from Western in London to the Faculty of Management in Kelowna.

“Coming to B.C. was partly to reconnect with my mom,” Laura says. “We had lived apart for a while but now we have come together as a family.”

She started her post-secondary career in the sciences and, despite her spirit of independence, Laura came to the same campus, same building, the same faculty, where her mom teaches management information systems. They got even closer when mom taught two of her daughter’s courses.

Joining the Marcolin ladies in the Okanagan soon after was younger sister Kelly (that’s her on the left in the top photo) who entered first-year Management studies in 2013—and apparently has some basketball game of her own. The sisters play together, and study together.

Switching into a university program in third year can be a challenge. But Laura says because Management students share a standard timetable and take all their classes together, the transition is OK. “It becomes a close-knit cohort that works together to help each other succeed,” she says, adding how that’s exemplified in the Live Case Challenge.

Every April, more than 200 third-year management students in the Industry Analysis course participate in Live Case where, over two days, student groups tackle a real-world business-related challenge involving a local organization. Marcolin’s case challenge was the struggle between product and service for the video production agency HuStream.

That got her interested in emerging IT business models, so she was asked to write an academic paper about it for future students. The case, to be published by the Ivey Business School, involves professorial input from Queens, Western, and UBC Okanagan. The “intricacies” of it appeal to Marcolin’s inner nerd.

“Case writing is a style of business writing but it follows a storyline. Sometime you make up characters and names and experiences that shape what will happen later in the case. It’s narrative with research and structured learning all together.”

That led to a summer job as a research assistant for Annamma Joy, a UBC Professor of Marketing whose international project about branding and consumer behaviour required Marcolin to visit Okanagan wineries. She surveyed their customers, gathering statistical data.

“It was pretty much a driving tour of the Okanagan,” she says. “Such amazing views! It was like a big adventure experiencing all this cool stuff. And it’s interesting to see that this region could reach the level of Napa Valley—that’s the way we’re going.”

Besides learning the nuances of winemaking and getting behind-the-scenes access, there were other perks: a typical day could see Marcolin exploring vineyards in the Okanagan Falls region, then “moseying home” to Kelowna after a swim in the lake, getting back at sunset.

Meanwhile, she was also in training camp for the women’s basketball team.

PART OF SOMETHING BIGGER THAN YOURSELF

“I was amazed,” Marcolin says, recalling the extension of camaraderie from student athletes, a group that can be competitive and exclusive. “I was just playing for fun and they encouraged me to join the team. It’s their encouragement that brought me back to varsity sports again, and I’m so grateful for that.”

By the time Marcolin entered fourth-year Management, she says she had a strong support system that made her more outgoing and less afraid to try new things. “That was a big one, actually—learning not to be afraid of change, or afraid of failure. You get comfortable being uncomfortable.”

And although she was still plagued with injuries, including another concussion, Marcolin has no regrets about playing one last year of competitive ball.

“Being in management is essentially like being part of a team,” she says, “so it’s not unlike being on a varsity sports team.”

“You learn lessons in each place that help you with your adventures in the other group. The work ethic you learn from sport and from having an intensive course load—they perfectly align with each other. You realize that you can handle more than you think.”

Management, she says, provides a multi-faceted education and many directions. With a penchant for logic, systems, entrepreneurial tech, and marketing, Marcolin is set on going back to school—perhaps to study law, finish her psych undergrad, or to pursue project management in business.

“Everything’s a business,” she says. “You can turn a passion into your career. From here you could run a basketball academy, or be a certified financial planner. You can do a PhD, or start your own business—any business. There’s so many doors and paths you can take, and no one can take your degree away from you.”

As for basketball? “I’m retired. From hard competition, anyway. My brain’s more important than my sports career.”

In June, Marcolin becomes a UBC alumna. She says that’s someone decidedly different than before.

“I’m much better at expressing myself and presenting myself. I’ve become more outgoing. I realized when I got here that you can be whoever you want to be. You can let out who you are—everything you’ve wanted to try and think and do.”

While motivated by instructors like Norine Webster (Live Case) and professors such as Eric Li (marketing) and her mom (of course)—“you just know they want to help you learn”—Marcolin says there’s another commonality in the Faculty of Management.

“Professors here always say, ‘This is the safest environment to try new things.’

“I keep meeting people who actually want me, personally, to do well. The environment is so conducive to being successful.”

So let out who you are.

“If they say ‘no’—if you don’t make the team—at least you put yourself out there. You tried. That can open other doors. Why say no? Say yes to more things!”

“If they say ‘no’—if you don’t make the team—at least you put yourself out there. You tried. That can open other doors. Why say no? Say yes to more things!”

She tried to fight nature and intentionally steered her career in the opposite path of her mother, associate professor Barbara Marcolin in UBC’s Faculty of Management.

Yet Laura Marcolin graduates this summer with a Bachelor of Management degree.

“People think I got into management because of my mom, and I really tried not to be like her,” she says with a shrug. “I came to my own conclusion that management was the way to go. It’s such a useful degree. So, yes, ironically, it seems like I am following in my mother’s footsteps.”

When your mom is your university professor, expectations are high. Laura was taught by her mom in two Information Technology Management courses (MGMT 350 and MGMT 429). It was a unique learning experience, she says.

“It’s a bit different having your mom as your professor; mostly because there are such high expectations. She expects a lot but she’s willing to help you get there. She’s tough but fair.

“I thought it was going to be odd, but I think we’ve grown together as I can relate exactly to what she’s talking about. I love having her around, love to talk about her research and school.”

Barb used reverse psychology with her eldest child and says she knew if she told her daughter to go into management, Laura would have taken an opposite course. Fate—and a desire to spend more time together as a family—helped weave Laura’s path.

“I can certainly say that Laura has always been an independent person and was always determined to figure things out on her own,” says her mom. “In fact, since she was 12 I knew not to tell her what to do, but instead to ask her what she would do next.

“It always worked out and I’m delighted that she’s become such a great individual.” 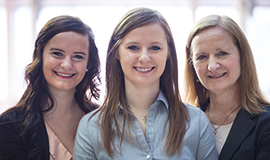