“There were struggles, and lots of tears, but it was a solid four years of really believing in what I was doing.” 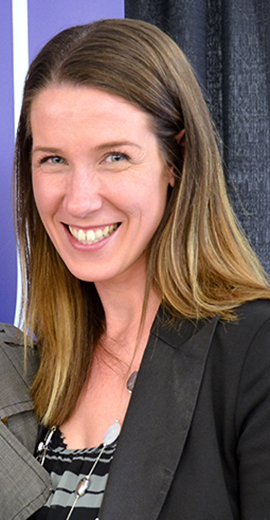 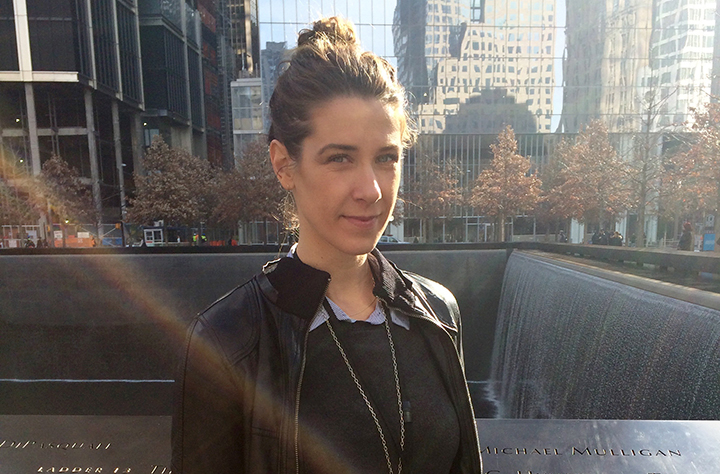 LINDSAY BALFOUR’S OFFICE OVERLOOKS Memorial Plaza and the South Pool, where sheets of water cascade into giant fountains created in the footprint of the fallen Twin Towers. Inscribed into bronze panels along the pool edges are the names of the nearly 3,000 people who died during terrorist attacks at the World Trade Center in February 1993 and September 2001. Why Cultural Studies?

Across the street is the 9/11 Memorial Museum where Balfour spends countless hours contemplating what museum items say about the way people engage with strangers after trauma.

It is intense but hopeful work that she began as a PhD student with a concentration in Cultural Studies at UBC Okanagan. Now Balfour continues as an Andrew Mellow Post Doctoral Fellow examining the museum pieces and their relationship to a philosophy of hospitality in a time of terror. She says her research—in a place some call a crypt—is anything but depressing.

“I think one of the things people forget is that 9/11 was one of the most successful rescue operations ever and an example of how, when faced with loss and shock, people’s instinct is to be kind,” she says. “The cultural texts produced in the aftermath of 9/11 are actually as much about this idea of hospitality, and strangers and strangeness, as they are about the event itself.”

PEOPLE IN THE MOMENT

Balfour points to a painting by David Stern as an example of people coming together to help one another and mourn. Stern’s painting, “The Gatherings,” depicts a group of strangers bearing witness.

“I think what this painting does is remind us that in those initial moments people wanted to be together and were committed to this idea of hospitality and generosity and love towards one another,” Balfour says. “People in those moments were drawn by some force outside of themselves. It was like one of those don’t want to look/can’t look away moments.”

Balfour, a mother of two children under five, spends her days searching for signs of humanity in cultural works produced around 9/11: from books written about the topic (there are hundreds), to mangled pieces of steel from the aiplanes’ impact, and a glass-encased brick from the compound in Abbottabad, Pakistan where Osama bin Laden spent his last days.

She commutes between New York and Kelowna (three weeks in and one week out) and says she has a love/hate relationship with the iconic Big Apple. She is alone in a sea of strangers, yet continually entertained and stimulated.

“New York can build you up and then break your heart a thousand times a day,” she says. “The highs are really, really high, but the lows are equally as devastating.”

It’s a place of heightened sensations, she says.

“It’s like having all your nerves rise closer to the surface of your skin. Everything just feels a little bit more.”

Balfour’s work will continue until August 2017 and culminate in a book she describes to laypeople as a “book about love.”

“There is something really telling about the fact that when facing that kind of shock, our first impulse is to tell someone you love them,” she says.

TERROR AS A THESIS TOPIC

The journey that led to Balfour’s New York residency began in an undergrad film class at UBC Okanagan. Balfour was tasked with writing a paper on the videotaped execution of Saddam Hussein. Her goal in writing the paper was to examine how our perception of human suffering changes when the person suffering is perceived as evil.

“This idea of humanity and suffering is differentially allocated according to this hierarchy of what it means to be human,” she says. “It’s easy for us to distance ourselves because we don’t think of them (terrorists) as human the same way as you and I are human.”

Balfour says having the freedom to choose a topic that intrigued her played a big part in her decision to pursue a PhD at UBC Okanagan.

“I would say that in most of my classes, even as an undergrad, I was given a lot of freedom to choose what I wanted to write about and that one paper was absolutely the catalyst for all my future work.”

Balfour has a way of making hard work appear effortless. In just 10 years, she earned a BA, master’s, and PhD—all concentrated in cultural studies. She designed and taught a Cultural Studies course on 9/11, was awarded the 2012-13 Provost’s Award for Teaching Assistants and Tutors, and delivered papers at Brown University, Columbia University, and in Dublin, where her topic was “Looking Saddam in the Eye: Emergent technologies and the ethics of visual confrontation.” She also found time to have two children.

Balfour says her UBC Okanagan experience has been nothing short of amazing, and if she’s lucky she will return one day to teach full time.

“The PhD process was honestly the best four years of my life and I wouldn’t trade it for anything,” she says. “There were struggles, and lots of tears, but it was a solid four years of really believing in what I was doing.”

Her advice to current and prospective students is simple: Take advantage of the fact that UBC Okanagan is a university campus where you can have unparalleled access to your profs and teaching assistants—something that doesn’t happen often at large university campuses.

“At most schools there’s no way you can walk down the faculty hallway and just knock on the door and say, ‘Hey, do you have a minute?’ ” she says. “That’s huge.”

The Gatherings by David Stern