“Sometimes I find it hard to define what I do, as my work often straddles the border of being a researcher, community developer and food activist — but I’ve come to realize that these labels don’t matter; I’m here to help in any way I can.” 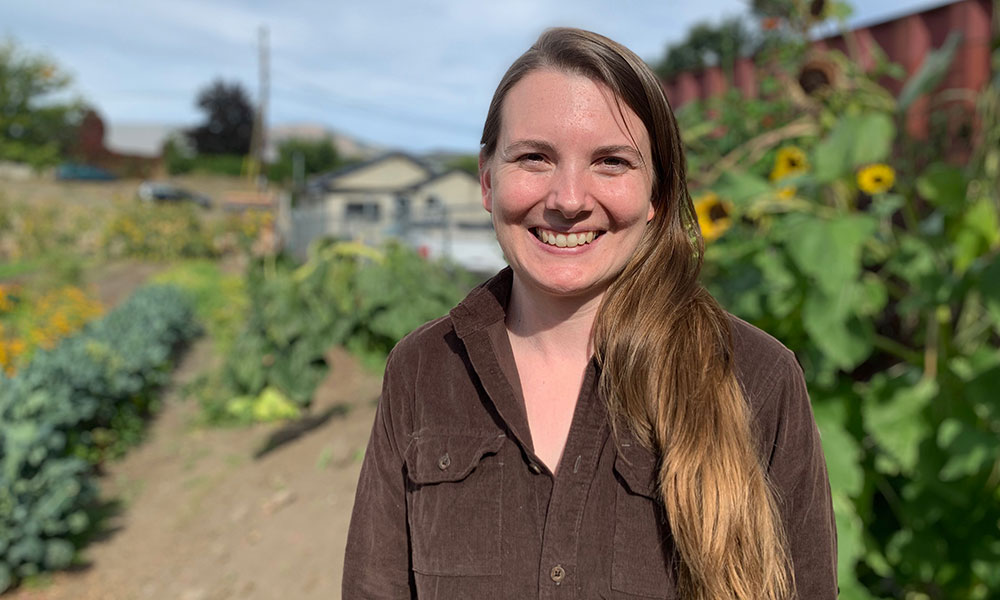 “I had always enjoyed the social sciences, but wasn’t sure where I wanted to go with them,” explains Harris.

Find out more about Interdisciplinary Graduate Studies “I assumed I’d have my ‘a-ha’ moment during my undergrad — but to my disappointment, that never really happened for me,” she adds.

Looking to immerse herself in the social sciences more broadly in hopes of finding her calling, Harris began researching interdisciplinary social science programs in Canada and the United States.

She found what she was looking for at the University of Chicago.  “I applied on a whim, was accepted, and relocated to Chicago — it all happened pretty quickly,” explains Harris. “When people ask me why I chose to leave Canada to pursue my master’s, I don’t really know how to answer them. The program sounded interesting, it was a prestigious school and I was young. I didn’t have mentorship around what to look for in a graduate program.”

Midway through her master’s, Harris finally had her ‘a-ha’ moment.

“I had the opportunity to do a neighbourhood-based ethnographic study of a community garden in south side Chicago, and I fell in love with ethnography as a way of doing research and being in the world.”

Ethnography is the study of individual peoples or cultures that focuses on the subjects’ customs and social interactions to gain a better sense of how they live.

Harris had found her passion, but not her home.

“I was so conflicted, because I was doing something I loved, but at the same time felt unsatisfied because I wanted to have a long-term research relationship with a community, and I knew that wasn’t going to happen in Chicago,” she explains.

“For me, living in Chicago was a one-year sacrifice I made to complete my master’s degree. I never had a strong connection to it as a place, so it felt like all of the relationships I was building had a time limit on them.”

After graduating from the program, Harris made her way back to Canada, accepting a role as an administrator at Thompson Rivers University (TRU) in Kamloops, BC.

“I don’t know if I was expecting to like Kamloops as much as I did, but I just fell in love with it,” says the Nelson, BC native.

“I knew it was a good-sized city that was beautifully situated in nature, but what I didn’t anticipate was how amazing the people would be,” she says. “It has this tight-knit community feeling where people treat you like you’re family. It’s a pretty special place.”

After spending two years working in various administration positions at TRU, including interim registrar, Harris decided to transition out of her role and into her PhD at UBC Okanagan (UBCO).

The decision to attend UBCO wasn’t a difficult one for Harris; in fact, it was the only university she applied to.

In 2015, Harris began her doctorate in Interdisciplinary Graduate Studies in the Irving K. Barber Faculty of Arts and Social Sciences’ department of Community, Culture and Global Studies.

“My priority was to research where I lived, and although that was a bit unconventional, I had the full support of my graduate supervisor Michael Evans, and Department Head Susan Frohlick. Without their backing I wouldn’t be here,” she explains.

Harris began her community-based participatory research with the Kamloops Food Policy Council (KFPC) in 2016. KFPC is a well-established grassroots network that was founded in 1995, making it the first independent food policy council in Canada.

“Its goal is to create a regenerative food system,” explains Harris. “They want to see agricultural practices and values that improve biodiversity, make the quality of soil better, support local landscapes and improve watersheds.”

According to Harris, KFPC is working towards their food goals by creating community capacity through policy, programs, education and partnerships.

“I’ve always been curious about how grassroots groups like this make decisions about what initiatives they want to advance,” she says. 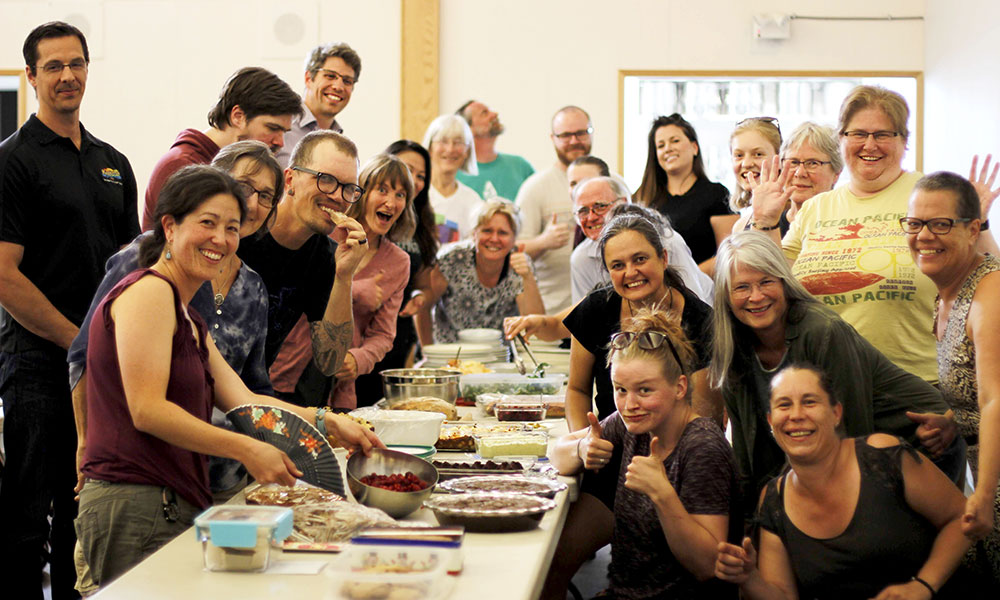 “With community food security there’s so many small projects being worked on, like little community gardens here and there. They don’t appear to solve complex problems in food systems, but they’re all contributing to building the capacity of an organization that can ultimately contribute to an expansive vision for future food systems.”

In addition to the theoretical work Harris has completed with the council for her dissertation, she’s also had opportunities to get her hands dirty.

“For me, it’s all about figuring out which community priorities I can support with whatever hat I’m wearing,” she explains. “I’ve helped launch an urban farm project, worked with local farmers to encourage more sustainable methods of doing business, and co-facilitated a visioning process for the council.

“Sometimes I find it hard to define what I do, as my work often straddles the border of being a researcher, community developer and food activist — but I’ve come to realize that these labels don’t matter; I’m here to help in any way I can.”

In 2018, Harris — alongside various community group partners — applied for a participatory research grant from the Vancouver Foundation.

The application was successful, providing funding for Harris to conduct an in-depth evaluation of the collective impact process the council was working on to try and drive community-based implementation of both municipal and regional food plans.

“Kamloops has a food and urban agriculture plan, and the Thompson-Nicola Regional District has goals and objectives around food too, so the idea was to bring local and regional government, Indigenous communities in the area and community groups to the table to identify shared aspirations across food policies and plans. We needed to find where the community energy was to be able to push projects forward,” she says.

The collaboration proved to be successful, with a number of projects advancing after the talks, including a pilot and feasibility study for a food processing hub that launched in the fall of 2019.

“The study was one of several funded by the province to explore the feasibility of a shared commercial kitchen space for new food processing businesses to get on their feet.”

Harris describes the hub as being the equivalent of innovation centres for technology companies, but instead of an office, it’s a kitchen.

“The food industry is incredibly complex to navigate — you need to know about food safety, packaging regulations, pricing, and how to manage food waste. It’s very challenging to have success if you have no industry background and no mentorship.”

The pilot saw five up-and-coming local food businesses receive business mentorship, each spending the fall of 2019 building their business plans before the pilot wrapped up in early 2020. The full launch of shared kitchen space was delayed due to COVID-19.

“It was really upsetting having our progress halted,” Harris recalls. “We could see the potential in the program and how much these individuals were benefitting from having this supportive infrastructure for local food. It’s not off the table just yet though. We’re excited about moving the project forward again this year.”

FROM STUDENT TO TEACHER

Aside from Harris’ academic pursuits at UBCO, she began working as a sessional lecturer in January 2020.

For Harris, teaching upper-level undergraduate courses on the anthropology of food and ethnography of urban agriculture provides her with a creative outlet.

“It really captivates me,” she says. “I’ve learned so much from the process of teaching; students continue to reshape my views on so many things, and we have this really respectful, collaborative dialogue that I appreciate so much.”

Acknowledging that food insecurity, particularly during a pandemic, is unlikely to go away in the foreseeable future, Harris says it’s imperative to give students a safe space to express their ideas and possible solutions.

“It’s so important they have a voice in evolving ideas. Having this space to bounce ideas off of each other and try to understand the views of others who may come from different backgrounds — I find that very powerful, and I know the students do, too.”

LIFE IN THE THOMPSON-OKANAGAN

In Harris’ sparse spare time, she enjoys getting creative with her nine-year-old daughter, Chloe.

“I’m really enjoying parenting at this older age,” says Harris. “We have all these shared interests, like going to the art gallery, or making crafts, or trying new recipes together. It’s a really special stage.”

A self-described ‘avid potlucker’, Harris also enjoys connecting with community members at local potlucks. “The council had the best potluck in town-pre-pandemic!”

Family and food aside, Harris has also recently been spending time with a local developer who is keenly interested in building a cooperative housing initiative.

The initiative would feature affordable, net-zero housing with space for residents to grow food right outside their door.

“My role is on the social development side of the project, essentially incorporating urban agriculture practice for each of the housing designs,” explains Harris. “I’ll admit this probably isn’t the best time to add to my juggling act, but I have so many interests and feel that living, researching and working in the community has really reinforced my commitment to it.”