“I get really excited about doing something that no one has done before.” 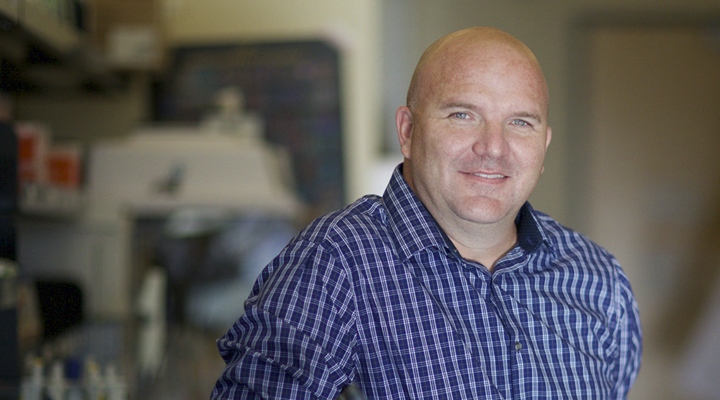 MARK RHEAULT has a computer monitor larger than many people’s TVs. “I need to be able to see my work,” he says, unabashedly.

Why Zoology? This makes sense as his biology research at UBC’s Okanagan campus involves studying the microscopic kidneys of insects.

Science wasn’t Dr. Rheault’s first choice as a career—like many young Canadians he wanted to be a hockey player. However, after more than 15 years of playing at a competitive level, Rheault was sidelined with knee injuries. Instead, he willingly switched his jersey for a lab coat.

“I was always interested in biology. My dad was a science teacher and so this choice came naturally.”

Rheault, an avid motorcyclist, soon focused his studies on physiology. Perhaps it was the echoes of being a thirsty athlete that drove him to zero in on kidney research. “I am interested in how the body maintains water and salt balance and, in particular, the kidney’s role.”

Now he’s an associate professor in the Irving K. Barber School of Arts and Sciences, teaching and supervising students enrolled in majors such as Biology, Zoology, and Biochemistry. 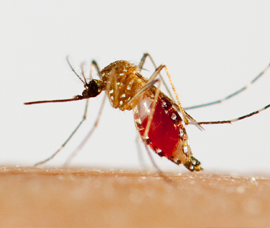 Thanks to mentorship from his undergraduate and graduate supervisor, Prof. Michael O’Donnell at McMaster University, Rheault saw the potential in insect research. “I was interested in comparative physiology and epithelial transport, the movement of molecules across a membrane. Mike O’Donnell was studying this process in insects and I thought this was a very cool approach.”

Rheault explains that insects are good models to study human physiology. “Insects are often simpler and more convenient to use than more derived animal models. In particular, they have quick generation times, so we can monitor adaptive changes in a relatively short time.”

“Insects are some of the smallest animals on the planet, yet they represent the greatest biomass. They are the most diverse, and they have a remarkable ability to adapt and survive in conditions when others cannot. It just makes sense to study them.”

That and the fact that they’re easy to come by—Rheault’s main study animals are mosquitoes and fruit flies.

“I breed thousands of mosquitoes!”

IMPACT IN THE OKANAGAN

After only six months of post-doctoral research, Rheault was eager to build his own research lab. Colleagues suggested he should consider UBC Okanagan. “Many of my classmates and collaborators were UBC graduates and wanted to return to their alma mater. I knew about UBC’s fantastic reputation for comparative and insect physiology, but I had never been to the Okanagan Valley.”

Rheault is enthusiastic about his move in 2007 to the burgeoning Okanagan campus in Kelowna.

“Coming to UBC Okanagan was really appealing to me. At an early stage in my career, I had opportunities that I may not have had at a more established institution. I have been able to help develop undergrad and graduate programs and had an impact on the evolution of our biology department.”

In addition, this move has enabled Rheault to foster his passion for outdoor activities, including riding his motorcycle to work. “My wife calls this my wind therapy,” he says. It’s his time to decompress and enjoy the short commute.

The main area that Rheault and his team of undergraduate and graduate students are exploring is how insects use transporter proteins to move ions and excrete toxins. Their findings may lead to developing new methods of insect control.

Traditionally, insect-control measures have involved the use of pesticides, which most often are toxins that target the nervous system. The catch is, they are not only toxic to insects, but if over-used can be harmful to humans. (For example, exposure to an insecticide was suspected as the cause of death of Quebec sisters Audrey and Noémi Bélanger in 2012 in a Thai hotel.)

“The current pesticides aren’t bad by themselves, it’s just that when they are improperly used, insects become resistant,” says Rheault. “Our goal is to understand how this tolerance happens and to identify new drug targets that won’t affect other organisms.”

Enter the epithelial ion transporters, which transport drugs out of the kidney. “Our idea is that if we can block the transporter’s ability to excrete pesticide, we can use less pesticide.”

This led to research with the UBC Okanagan plant biochemists who are interested in developing new, natural mosquito control methods. Rheault is working with UBC Okanagan chemist Susan Murch and other external collaborators to examine how natural products may keep mosquitos at bay. Similarly, Rheault has collaborated with biologist Soheil Mahmoud looking at essential oils as control mechanisms.

“I can’t do all this research work by myself, it requires collaboration. We have plant biologists and analytical chemists on one end, and I facilitate the animal bioassays on the other.”

“My hope is that we can develop novel, environmental-friendly insect control measures and that we can have impact on emerging insect-borne diseases in the developing world.”

“I get really excited about doing something that no one has done before. The reality of research is that it’s often disappointing. You need to learn what to get out of the failures and small discoveries. These are all small steps forward.

“There are very few big, big scientific discoveries. We forget they were discovered thanks to the huge number of people who built a knowledge base before them.”

Rheault tries to echo this sentiment to his students. He enforces that regardless of the impact, the discovery made by the student is theirs. “The most exciting part of my job is working with young people who are completely engaged in what they’re doing; they’re passionate, have a huge amount of knowledge, and potential.

“The most challenging aspect of working with students is to remind them that research—and learning—is not about the recognition, it’s about the personal accomplishment.

“University for me has always been about appreciating the journey.”