“I was drawn to the idea of coming to a smaller campus that was research-intensive, could recruit very strong graduate students, and valued undergraduate research.”

MICHAEL RUSSELLO works at the interface of ecology and evolution, employing genetic and genomic approaches to study threatened global biological diversity. Sometimes that means not just restoring populations of endangered species, but discovering them in the first place.

Why Ecology and Evolutionary Biology? An Associate Professor of Biology at UBC’s Okanagan campus, Russello was recently at the centre of an announcement about the discovery of a new species of giant tortoises living in Ecuador’s Galápagos Archipelago. This was a follow-up study to work he began as a Postdoctoral Fellow at Yale University.

“A critical component to effective biodiversity conservation is to recognize and understand what species and populations require protection,” Russello says. “Given the small population size and reduced genetic variation, this new species is not only distinct but of high conservation priority.”

Russello heads the Ecological and Conservation Genomics Laboratory at UBC’s Okanagan campus, where he uses DNA to inform conservation strategies that help address the biodiversity crisis.

“Using genetic and genomic approaches, we can mine DNA for information about population history, including understanding how population size has changed through time,” he says. “We can also learn a lot about how individuals move across the landscape, and how human activities may limit population connectivity.”

Russello first pursued conservation genetic research while a PhD student at Columbia University, where he conducted one of the first studies that used genetic data to inform captive breeding decisions, in this case for the endangered St. Vincent Amazon parrot.

“Many captive breeding programs for endangered wildlife species have very little background information regarding the individuals they house, including in some cases, whether they are even male or female.

“We used DNA to determine the sex of individuals and how related they were to each other. This information can then be used to make recommendations about pairings that would help maintain genetic diversity in the population.”

Russello joined UBC Okanagan in its infancy. At the time, the space his office and lab now occupies was a dirt lot and construction activity was a constant. He admits he knew little about Kelowna when he agreed to relocate from the U.S., but believed in the university’s vision of what it would someday become. 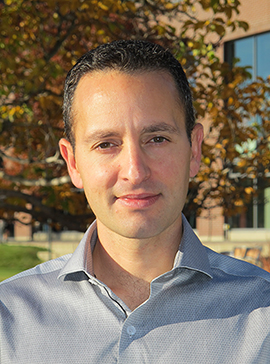 “I was drawn to the idea of coming to a smaller campus that was research-intensive, could recruit very strong graduate students, and valued undergraduate research,” he says.

Russello became interested in the biodiversity crisis and the sharp increase in species extinction at a young age. Moreover, while a biology student at the University of San Diego, he became increasingly intrigued by the power of molecular markers, primarily applied in biomedical sciences. Russello was fortunate to have a professor identify his dual passions and introduce him to conservation genetics, a brand new field at the time.

“My professor gave me a paper that had just come out and said she thought it might be a field that would be perfect for me. That was when it clicked.”

PhD student Evelyn Jensen has worked with Russello for four years and recently accompanied him to the Galápagos Islands, where she helped collect blood samples from the giant tortoises on Pinzón Island.

Jensen speaks highly of Russello, who she describes as a “thorough scientist” who pursues excellence in all things.

“Although I don’t think he would consider it his motto, he sets the example in our lab group that anything worth doing is worth doing well,” Jensen says.

He also takes a fairly hands-off approach when teaching; providing graduate students with the resources and tools needed to carry out projects independently.

“He is always supportive and available when we need him, while giving us the opportunity to develop as independent researchers,” she says.

Russello’s work doesn’t always involve travel to faraway places. In fact, he is currently studying the genetic basis of variation in reproductive behaviour in Kokanee salmon living in Okanagan Lake—a population he describes as “one of the most interesting in the world.”

What makes this population of Kokanee unique is the existence of two different reproductive forms; one spawns in streams, while the other spawns along the shoreline. When not spawning, the two species co-occur in the lake, making reproductive strategy one of the only obvious differences between the two.

“This system provides a great opportunity to better understand mechanisms underlying how new species arise,” says Russello. “Also, being able to unequivocally identify shore- and stream-spawners has transformed the way the provincial government manages and monitors Kokanee, a species of economic, cultural and conservation significance.”

Russello says the graduate students he works with today in his lab collect more data in a week than he did during his entire dissertation. Hopefully, that shift will lead to increasingly robust data that conservationists can use to tackle biodiversity loss and save more species from extinction.