Education
Bachelor of Science in Nursing (2014)

SHE WOULD NEVER DARE compare herself to the familiar faces of caring that people everywhere recognize—Florence Nightingale, Nelson Mandela, Mother Theresa. But Samantha Waller has no less a burning desire to help the disadvantaged and change the world for the better, one life at a time.

Waller is a fourth-year nursing student at UBC’s Okanagan School of Nursing. She has taken on the mantle of leadership and recognizes she can play a larger role.

Need donations to build a nursing clinic in rural Ghana? There’s Sam Waller, pitching suits at a Chamber of Commerce meeting, collecting bottles, meeting with groups of UBC students, talking to high schoolers and connecting with people in Alberta’s energy capital of Fort McMurray, publicizing UBC’s efforts to build the clinic for a Ghana village deprived of accessible health care.

“How do you get people to engage in something they might not be aware of? There I was, talking to business people, something I had never done before,” says Waller. At the outset, it was nerve-wracking and Waller feared rejection. Then she overcame those fears.

“The worst that could happen is that they would say no. But it was really good. I put myself out there and found it doesn’t hurt to ask. People will give you more than you expect.”

The Ghana clinic fund went over the top of its $10,000 goal, helped in no small part by Waller’s efforts banging the drum for charity: $2,500 from Mount Boucherie Secondary School, another $350 from their drama club, two $500 donations from Fort Mac and trunksful of empties adding up to another $350—as well as a surfeit of personal donations from those business executives.

Waller, 23, was also among the contingent of UBC Okanagan Nursing faculty and students who spent six weeks in remote Ghana this spring, working in adverse conditions to deliver health care. The UBC cohort also educated young mothers in best-care practices for their babies and in treating an assortment of ailments unseen in Canada.

A recurring theme in the blog is an appreciation for teamwork and support, qualities necessary for the Ghana Girls to persevere through hardships on the job: child burn victims, trauma patients without pain medication, power outages, lack of running water, and abject poverty at every turn. Passages include:

Sam and Christy receiving and comforting a child with 3 venomous snake bites when no one was there. Sam continued the care and support for the child and family into the next day until the child passed away.

Sam being pulled into a pediatric emerg assessment room to assess an 8 year old patient in respiratory distress. Then demanding certain medication orders from the doctor and initiating and setting up for a code with Muriel and Madie. They all used their engineer and mechanic brains (they didn’t know they had them) by taping together the broken suction equipment so it worked.

Sam assessing and managing children with extreme fevers when there was no medication available. Holding naked babies in the air under the ceiling fan and wiping them down with cool water until their temps came down.

Sam being peed on by children everyday and taking it like a boss.

Before the whirlwind trip in Africa where the RN students took Ghanaian nursing students under their wing, Waller was doing the same back home.

As a teaching assistant in her third year, Waller mentored first-year students in clinical labs, providing a reassuring voice of experience. “They felt comfortable talking to me. I had been in their situation before.”

Waller also gets high praise for what she does best—bedside nursing—as she did in a practicum at Penticton General Hospital. She has attended to terminally ill patients and their families, handled bedside crises, and done the specialized by routine work of delivering meds, carrying out physicians’ orders and acting as a member of an interdisciplinary care team.

“There are these moments,” says Waller. “It is a privileged opportunity to be with people and care for them at the beginning of life, at the end of life, and all the trials and tribulations in between. That’s what I am doing and that’s what I want to do in life.”

“A lot of what I really love about nursing is to be at the bedside with patients, talking to them, being a reassuring voice, making somebody’s day a little bit brighter.” She credits her grandmother and aunt, both nurses, as early influences on life.

However, Waller says the defining turning point where she decided nursing would be her life’s work happened during a family vacation in the Dominican Republic when she was 15. “I had never seen poverty before,” she says. “I decided I never wanted to go to a place like that again unless I had something to give back.”

One day on that same trip, as the Waller family was walking down the street carrying snacks, they encountered a woman with her infant, begging for food. They shared their lunch with the woman.

“She handed me her baby. The child was thin and malnourished. That was the defining moment,” Waller says. “That’s when I decided I wanted to be a nurse.”

The depth of knowledge she has with a BSN degree, the ability to influence patient care, demonstrate leadership, and be part of a transformational team all appeal to Waller.

“You really need good people to make the system work. I am coming out with a credential and a degree where I’ll have lots of opportunity and time to grow. It’s exciting.”

Waller credits her professors, Manuela Reekie and Jeannette Vinek among them. “They really inspire me. They have been in nursing a long time and they’re still passionate.”

As an educator, Reekie meets many caring and intelligent aspiring nurses of tomorrow. “Every year there are always those students that shine a little brighter than their peers,” she says. “Their passion for making a difference and for leaving a positive footprint in their wake is evident.”

Waller distinguished herself from the moment she entered the nursing program in 2010, Reekie says.

“It was clear from the very beginning that this young woman was driven, and that for whatever cause she stood behind she would give herself completely.”

Reekie calls Waller’s fundraising efforts for the Ghana clinic a “beautiful example” of Waller’s degree of commitment to something she believes in: “I have no doubt that as Sam leaves us and begins her career she will continue to shine. Her future is bright.”

As for that future, Waller would like to practice in critical care and emergency nursing. She has a goal of joining the Red Cross emergency response team for global disasters such as earthquakes, tsunamis, and floods.

“I want to get in on the ground and help people,” she says. “It’s important to keep your life in perspective and give back. In Canada we are really privileged. We have a great education system. I have such a great start to my career, thanks to UBC. I know how well prepared you are when you leave.”

“There are these moments. It is a privileged opportunity to be with people and care for them at the beginning of life, at the end of life, and all the trials and tribulations in between.”

Samantha Waller and her fellow RN students tell the story of “Hospital Life, Clinic, and Weekend Adventures” in an expansive journal of life in Ghana. The following is taken from their March 30, 2014 blog entry.

Thursday afternoon we went off to Changshegu to spend the night. The village doesn’t have electricity or running water.

We started the afternoon at the building site of the Changshegu clinic, which Sam Waller, Caitlin Robertson, and Sarah Duddle led the fundraising for this year. Construction has been happening swiftly since we arrived in Tamale. The foundation was completely poured and the walls are going up quickly.

Sam found the experience to be very surreal, emotional and exciting to be standing in the middle of the clinic that she, Caitlin and Sarah had worked so hard for and thought about for such a long time.

This clinic is a huge gift to this community and its amazing people. They have expressed unbelievable gratitude for what the people in Canada are doing for them.

Thursday evening we gave out gifts (books and toothbrushes) to the orphans in Changshegu. We played games, sang songs and cuddled some kids that needed some loving. Sam has now got a cult of children that chant her name like a song over and over: “S-A-M SAM, S-A-M SAM.”

We stayed in the chief’s compound with him and his family, and settled into bed in our little turquoise mud hut—which quickly turned into a long sleepless night in a house that felt like a sauna set to the highest setting! We were drenched head to toe. And we ran out of water.

At 4 a.m., it was time for the “call to prayer” (a.k.a., the soundtrack to our lives in Ghana). It tells all the Muslim people that it’s time to pray. We normally hear it echo out of speakers around town but in a rural village with no electricity it was up to a man to stand in the centre of the town and sing as loud as he could. Off in the distance we could also hear someone else singing for another village. It was so beautiful!

In the morning we came home to our luxurious showers with no curtain and ceiling fans. We were reunited with our beloved Ghana family of nursing students. 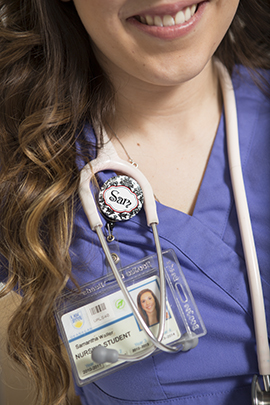