BIOLOGIST SANJOY GHOSH is a rebel with a cause. Sure, his rebellion is of the archetypal University Professor kind—moral, accountable, collegial. But as a nutritional scientist, he’s decidedly antiestablishment.

The global food economy—a formidable regime, what with its cereal mountains, factory farms, and deep-fried GMOs—looms large over Dr. Ghosh and his international research team at UBC’s Okanagan campus.

Looking every part the tousled academic in jeans, work boots, and smudged eyeglasses, professor Ghosh follows a lifelong purpose to scrutinize biochemical aspects of dietary fats and exercise (or lack thereof) to help prevent the development and complications of obesity and diabetes. It’s no picnic.

Touch another man’s food, let alone billion-dollar food industries, and you risk coming back with a stump.

That is the challenge and part of the fun, he says: “If it is boring, I won’t do the research.”

Ghosh & Co. look at the effects of PUFA on our health, which is prey to a vicious cycle of “overnutrition” and physical inactivity, causing obesity. Indeed, North American cases of obesity and diabetes are rising on a pandemic scale.

“Today,” he says, “the amount of polyunsaturated fats in our world may be one of the leading causes of why we are so lazy.”

Ghosh credits his lab’s recently published research findings to current graduate students Amy Botta and Ye Jiayu, and former grad student Julianne Beam. He also insists that his success so far is tied to a number of keen undergraduate students from the Irving K. Barber School of Arts and Sciences, the latest being Lisa Renaud, winner of a 2015 Undergraduate Student Research Assistantship. The fourth-year Microbiology student has a personal history with diabetes, much like Ghosh himself.

He says, “I have been very lucky with undergraduate students so far in my lab, and many of them love the research for personal reasons.”

Essential for human survival, omega-3 and omega-6 polyunsaturated fatty acids (n-3 PUFA, n-6 PUFA) should be consumed in about equal measure. But here’s the kicker: the Western diet has increasingly spun out of control with n-6 PUFA consumption, which can result in increased tissue inflammation and interfere with n-3’s healthy aspects.

North Americans ingest about 10-20 times the amount of n-6 as n-3, largely in the form of refined oils. Corn oil, for example, has an omega-6 to omega-3 ratio of 46:1 compared to pressed oils such as olive (14:1) and flaxseed (0.3:1). The fact remains that until about 60 years ago, humans were never exposed to such high levels of n-6 PUFA in their evolutionary history. “And genes do not change in 60 years!”

Renowned exercise scientist Dr. William T. Gibson supervised the experiments at UBC’s Vancouver campus. With a specialized enclosure that measures CO2 and uses a grid of laser beams to detect movement, the dual-campus research team compared the physical activity of female mice on a PUFA-rich corn-oil diet versus those on an olive-oil diet.

The researchers found that there was about a three-fold difference in voluntary movement: the corn-oil group moved less and developed insulin resistance, a condition in which glucose (blood sugar) builds up in the body’s blood instead of being absorbed by the cells.

The report proposes “excess dietary n-6 PUFA as a novel biological risk factor which may predispose humans to a loss of physical activity… We strongly recommend that particular attention be paid to controlling dietary fatty acid levels, especially that of n-6 PUFA, while planning lifestyle interventions to reduce sedentary behavior and insulin resistance in susceptible populations.”

The “bombshell” of a research paper answers a simple question: If food determines everything, then why wouldn’t it determine physical activity?

“We tend to think there’s an inherent, fixed capacity of each human or animal to exercise, but that may not be true,” Ghosh says. “These factors in motivating physical activity can actually be influenced by our diet.”

And in another recent study, Ghosh found that fish-oil supplements—rich in healthy n-3 fatty acids—can have detrimental effects. Conclusion 1: heaping more PUFAs into a diet already too high in polyunsaturated fats from vegetable oils can cause damage. Conclusion 2: Eat fish, not supplements. (“You can’t really overdose on fish!”)

His focus on n-6 PUFA is a niche research area that challenges clinical guidelines, he says, and it can have “shocking” results.

“Hard truths? That’s why universities exist. I am a public scholar with a public responsibility.”

When he gets revved up, Ghosh speaks with the enthusiasm of a town crier announcing good news. He raises his voice, wobbles his head, and punctuates the air with hand gestures.

“I came to Canada to do research! I now have an opportunity to do something real, and it strikes the core of my heart.”

“I am a pharmacist from India” is the tidy sum of Ghosh’s life, but there’s so much more.

In the megacity of Kolkata (formerly Calcutta), India, Ghosh was the firstborn, overprotected son in a family afflicted by disease. His mother had diabetes to which she lost two siblings.

As a boy, he was not allowed to play outside alone and—before computers and video games—spent all his time reading books, including his mother’s medical texts.

Because of his familiarity with diabetes, Ghosh pursued related research as a master’s student at UBC Vancouver. There at UBC, following graduation from the Bachelor of Pharmacy program from Bangalore University, he met two of the most influential people in his life. (He even married one of them, microbiologist Dr. Deanna Gibson, now his colleague and fellow researcher at UBC Okanagan. “Her expertise begins where mine ends.”)

As a PhD student, Ghosh worked primarily in a cardiac metabolism lab under the supervision of Dr. Brian Rodrigues, who encouraged the graduate student to research the relatively new field of cell death in the diabetic heart.

The goal was to expose the detriments of saturated fats. Instead, their findings revealed the opposite.

Ghosh tried to publish the research findings in 2004 but the paper was rejected five times. He was shunned but not silenced, and the early rejection served as a valuable lesson, he says. “If people are not ridiculing you to some level—if they say what you’re doing is weird—if you are not getting rejected, then you are not doing fundamental research.”

His mentor, Dr. Rodrigues, taught him work ethic and “the power of brute force.”

“Of all possibilities, he said run all of them, research all of them—brute force. I’m also glad he didn’t throw me out of the lab when I showed him the ‘weird’ results. He kept on telling me, ‘Your data is your data.’”

Ultimately, Ghosh’s saturated fat study won an international research award. “That breakthrough started it,” he says. “I knew I was onto something.”

“It was shocking, and a real eye-opener for me—like, ‘Welcome to food, Sanjoy!’”

“Hard truths? That’s why universities exist. I am a public scholar with a public responsibility.” 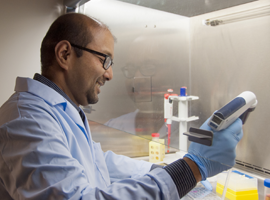 “Fat” is a heavy word with ugly implications about malnutrition, obesity, and disease. But all fat is not believed to be responsible for the epidemic of diabetic cardiovascular disease that ails billions of people around the globe.

“High-fat diets will not kill you, but high-carb diets will,” says professor Sanjoy Ghosh. “All the current indications are that a healthy diet is something similar to what our grandparents ate: butter, eggs, meat, milk, whole food, not processed food, not cereals, not anything out of a package. But the food system now is pretty messed up.”

The health crisis started in North America during the industrial boom of the 1950s, which saw new food surpluses and the advent of mass-produced fat substitutes such as margarine, shortening, trans-fats, and refined salad oils. Ghosh adds that even eating farmed animals fed grains and seeds that are rich with polyunsaturated fats (PUFA) is a major factor, in addition to the “intentional intake” of PUFA through vegetable oils or margarine.

Refined oils, with a high concentration of PUFA made from corn, canola, cottonseed, soybean, sunflower, safflower, etc., entered the public consciousness as a form of vegetable—willing self-deception: from plants, therefore healthy.

Keys and his ilk made an oversimplified equation somewhat palatable for the 1950s populace: saturated fats = cholesterol = heart disease.

“It’s a cholesterol-centric world,” says Ghosh. “For a long time we measured cholesterol as a biomarker for everything. Maybe people should start measuring exercise, voluntary physical activity, inflammation, and other things, and really look at how unsaturated fats influence health.”

He doesn’t mince words about it.

“It’s about common sense, not complicated BS solutions. Why do you have so much cancer, so much diabetes? Well, we know the science. The politics is a completely different scenario.”