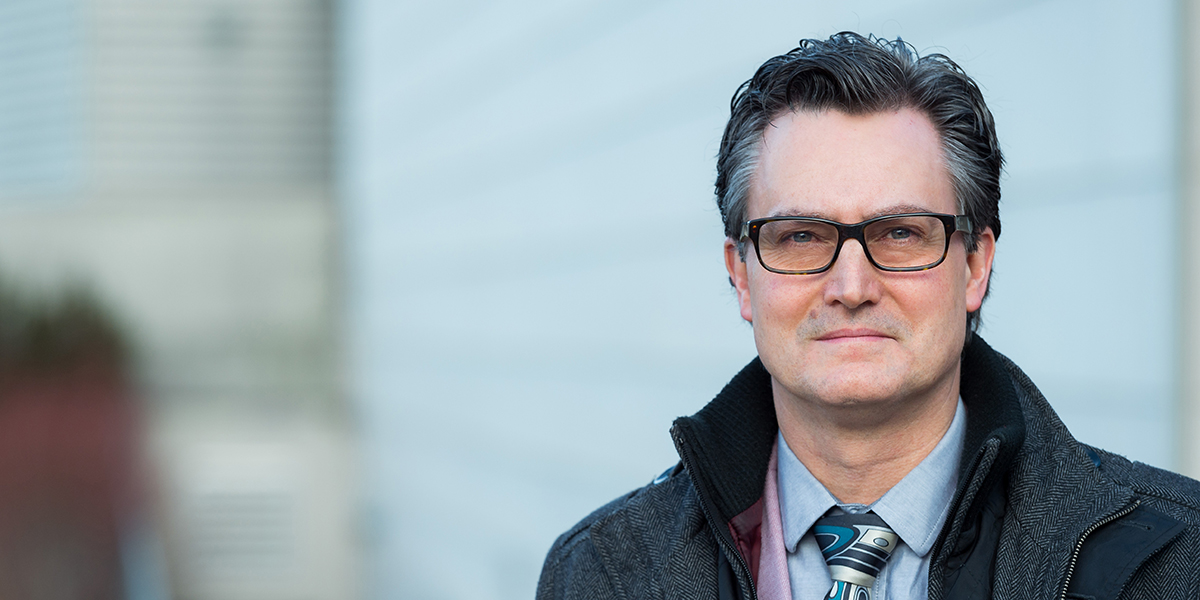 Throughout history, Indigenous people have been depicted as savage or primitive. Romanticized notions portray them as being “one with nature.”

Prof. Stephen Foster says these kinds of misrepresentations are not just North American, they reflect an eerie worldwide stereotype.

Foster is an accomplished video and electronic media artist of mixed Haida and European background. At UBC Okanagan, he focuses his research and visual work in areas of electronic media, themes of indigenous representations, past or future, and notions of simultaneity and transformation.

“I am interested in the underlying motivations of how we make presumptions or look at the world,” he says. “We often see images and take them for granted—we don’t think about the context behind the images of Indigenous representations.”

That context is at the core of Foster’s artistic practice and research in themes of Indigenous representations.

In the annual Summer Indigenous Art Intensive, Foster brings international and national Indigenous scholars and artists together on campus to interact with students.

A professor of visual arts and digital media in Creative Studies at UBC Okanagan since 2005, Foster originally moved from Toronto to the Okanagan to teach at Okanagan University College in the Fine Arts department. In 2006, he and colleague Mike Evans (who teaches Community, Culture and Global Studies) developed the Summer Institute for Indigenous Interdisciplinary Graduate Studies, inviting scholars from around the world to share their research from an Indigenous perspective. 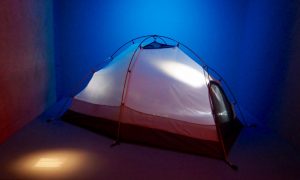 A multi-channel video and audio installation, Raven Brings the Light, by Prof. Stephen Foster. Part of the “Transformer: Native Art in Light and Sound” exhibition at the Smithsonian’s National Museum of the American Indian.

“Transformer” is the work of 10 artists who use light, digital projection, installation and experimental media to draw viewers into a world of traditional and nontraditional indigenous experience, spanning and combining ancient artifacts and in-the-moment new media.

Garneau, the curator, formed his ideas around this exhibition through the residency at UBCO. Over the past four years, he’s worked with the other visiting artists taking part in the summer intensive.

Participants in the intensive can collaborate on projects, and learn new approaches from other artist-scholars working with different media and from different perspectives.

“Transformer” is uniquely tied into the summer intensive and invited artists, Foster says.

“What we have been able to do here has really helped form and focus this type of work, which has an important impact for our former graduate students.”

“Transformer: Native Art in Light and Sound” runs through 2018 at the National Museum of the American Indian, part of the Smithsonian Institution in New York.

Foster’s installation in the exhibition, Raven Brings the Light, imitates shadow play that an adult might perform for a child on a camping trip with hands and a flashlight.

The piece references the Haida story of Raven, who brings daylight to his dark world by transforming himself into a boy and tricking his grandfather to release the light.

Foster’s work about culture and narrative interprets the fable and projects it into the future.

“Thinking about Indigenous traditions and incorporating placed-based ways of looking at an art practice changes the way we think about education in art institutions and structuring of art programs.”

Foster, who is also the coordinator of the Asper Centre for Artists’ Video, and director of the Centre for Indigenous Media Arts, instructs courses dedicated to video production, digital media, and visual and cultural theory.

He says the study of visual arts shouldn’t always be confined to older, conventional ways of organizing fine-arts programs. Considering other areas of art production, such as eco art, Foster says, “We can be more open and reach across disciplines.”

Find out more about our Visual Arts program

“We often see images and take them for granted—we don’t think about the context behind the images of Indigenous representations.”

Corbett’s video work, Four Generations (2015), is also featured in the “Transformer” exhibition at the Smithsonian’s National Museum of the American Indian.

“It is somewhat of a surreal experience,” he says, “not just to be included, but to have my work so prominently displayed on much of the exhibition’s promotion material—especially seeing my grandmother gazing majestically over the streets of Manhattan is a powerful, spectacular image. It’s emotional to me because it symbolizes the greatness of her life and her heritage—not necessarily a reflection of my artistic ability.”

Corbett adds that he’s both humbled and pride-filled to know that he is an active participant in one of the world’s greatest centre for modern and contemporary art.

“To be identified as an artist that is breaking new ground in digital media art—not just as an artist, but as an Indigenous artist—is very special to me.”

Corbett completed his MFA at UBC Okanagan in 2015. His previous work has been exhibited in Italy, Bulgaria, Croatia and Japan, and in numerous Canadian exhibitions.