“Our class is pretty awesome and I love everyone. That’s a great part of the SMP. It’s the community you get. There’s only 32 of us so it’s pretty easy to get to know people.”


A Shift in Confidence

Pursuing a degree through the Southern Medical Program proved to be good medicine for Tanelle Smith. 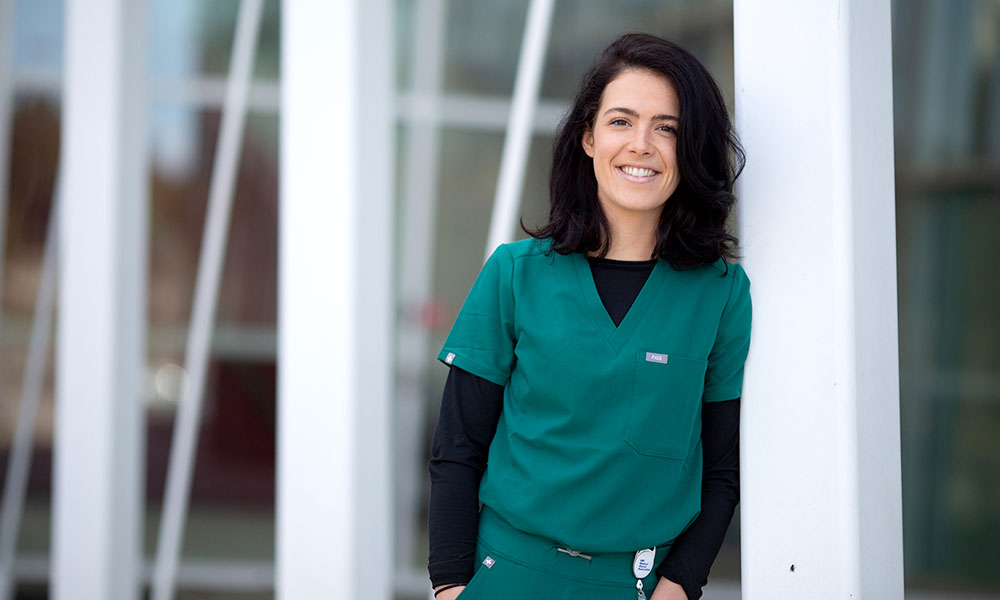 IT’S AN UNDERSTATEMENT TO SAY THAT TANELLE SMITH moved around a lot as a young girl. Born in Dawson Creek, BC, her father worked at various wood and pulp mills across North America. She racked up life in one town after another the way a snooker player racks up pool balls.

Find out more about the Southern Medical Program “I actually don’t remember them all,” says Smith, recounting her youth with chatty exuberance. “But it was really fun. I got used to introducing myself all the time and being a flexible person.”

Now a third-year student in the Southern Medical Program (SMP) based at UBC Okanagan, Smith credits her bouncy childhood with helping her cope with a shifting educational trek that eventually led her to UBCO.

THE PATH TO BECOMING A DOCTOR

Smith confesses she applied to UBC’s medical program on a whim, after discovering an interest in science during her undergrad. “I wanted to do something where I could directly help people.”

Every year, UBC admits 288 new students into its undergraduate medical program. The bulk attend the university’s Vancouver campus, but the remainder — 32 students per region — attend satellite programs at the University of Victoria, the University of Northern British Columbia and UBCO. Established at UBCO in 2011, the SMP was designed to help medical students “meet the health-care challenges of tomorrow,” and serve the needs of communities throughout the Interior Health region. 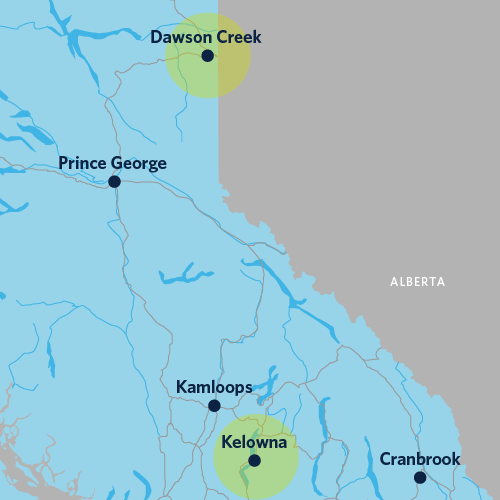 The SMP had a number of attractions for Smith; in addition to bringing her closer to family in Kelowna and Kamloops, the program offers a special focus on rural medicine. In the tiny towns and villages where Smith grew up, health care professionals didn’t always seem personally connected to community. But she wants to be a different, more integrated and community-involved doctor — the kind the SMP trains students to be.

As the first in her family to attend university — and with little exposure growing up around people in the medical profession — becoming a medical doctor initially didn’t seem like a plausible option. Fortunately, as Smith began to ponder that possibility during her undergrad, she found strong support from family members and university mentors.

Smith is a descendent of the Upper Nicola Indian Band — a community of the Syilx Nation — through her father and grandfather. Like many, Smith’s family was influenced by events such as the residential school system and the Sixties Scoop. Despite being proud of her heritage, this affected Smith’s confidence in her identity in academic institutions and the field of medicine, where historically there has been little room for Indigenous people and ways of knowing. But confidence in her Syilx-self further blossomed in 2019 after attending the University of Alberta’s SING program (Summer Internship for Indigenous Peoples in Genomics). During the week-long workshop, which focused on chronic wasting disease in animals, she interacted with elders, trappers, and, importantly, academics with backgrounds similar to hers.

“I suddenly felt free to be myself. I felt it was the first time I was surrounded by people who were Indigenous scientists. They were people like me getting PhDs and doing environmental science.”

At UBC in Vancouver — where all medical undergraduate students begin their studies before transitioning to the other campuses across the province — Smith spent her first semester in shared housing with three other Indigenous medical students. This arrangement was a source of strength and community, and — along with the non-Indigenous friends made in her program — helped ease her anxieties about possible reactions to her heritage. 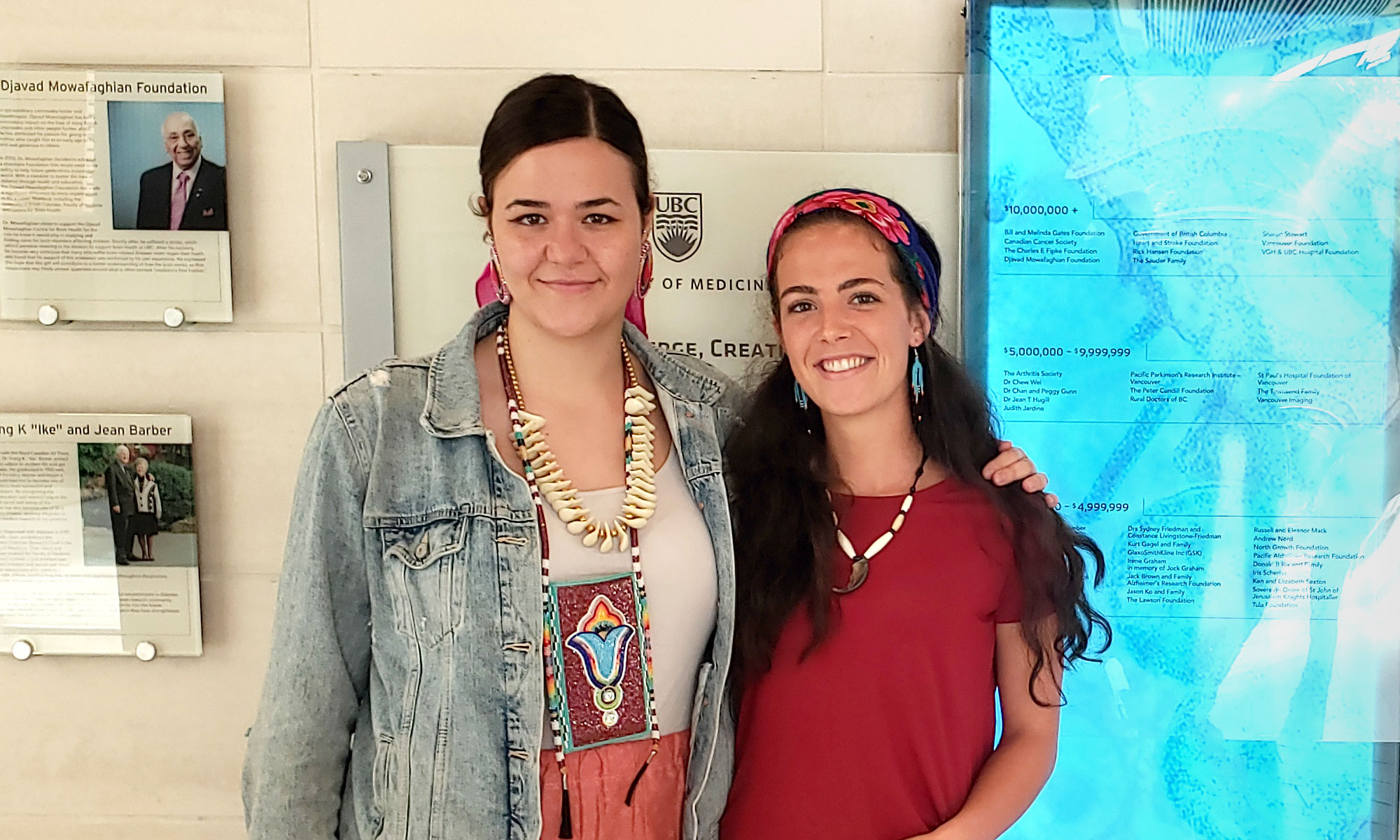 Smith has particularly bonded with fellow SMP student Samantha, who roomed with her in Vancouver. Samantha is a member of the Metis Nation Alberta and a descendent of the Peayasis Band.

When she later moved to Kelowna in January 2020 to continue her studies in the SMP, Smith’s cultural confidence continued growing, since she was closer to family as well as her community of peers at the SMP site.

The health-care challenges currently affecting the world — specifically COVID-19 — have, for now, somewhat altered the learning experience for SMP students like Smith.

She’s impressed by how the Faculty of Medicine has adapted to the pandemic. Currently, lectures for first and second-year students are all online, but SMP students can still do some in-person clinical skills training, such as musculoskeletal exams, in a hospital setting. Some aspects of clinical skills training, like conducting psychiatry interviews, are done over Zoom.

The social resilience Smith built up from her semi-nomadic childhood has also proved handy during the pandemic. As vice-president of social events in the program, Smith and two classmates are in charge of arranging all social events. Despite COVID-19, the trio has found ways to keep students uplifted in a difficult time.

“I’ve driven around town dropping off supplies for games and snacks for classmates. Then we’ll get on Zoom together and play games like Mafia.” Smith also helped round up classmates at a pumpkin patch near Kelowna where — socially distanced — they scampered through a corn maze and pelted pumpkins with slingshots.

“That’s a great part of the SMP. It’s the community you get. There are only 32 of us so it’s pretty easy to get to know people.” 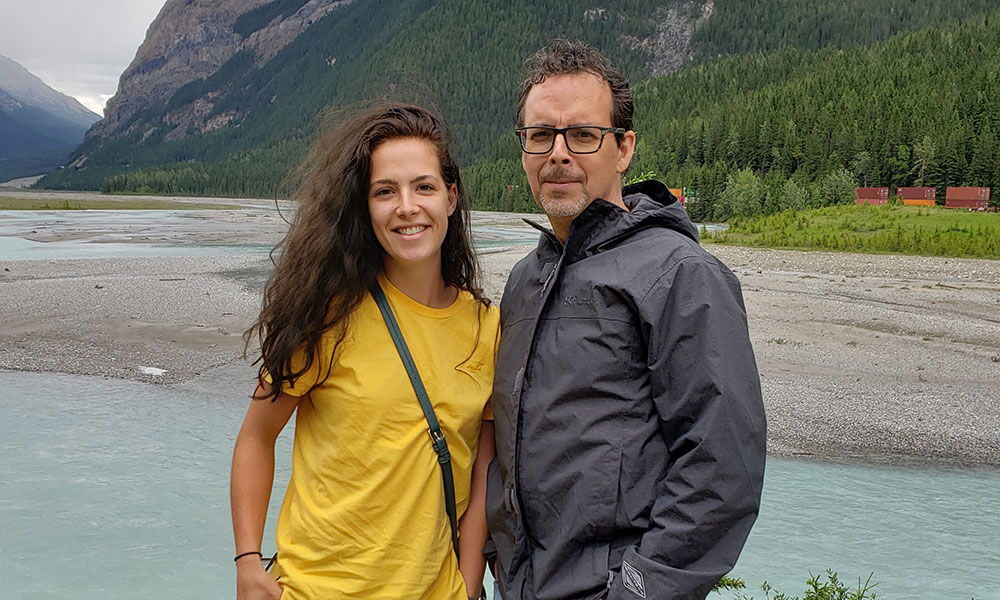 Smith and her father in Field, BC.

Now living with her father in Kelowna and closer to her extended Syilx family in Kamloops, Smith is learning more about her culture. She tracks deer in the mountains around Kamloops with her father and has learned to hunt grouse with a bird bow.

As for what kind of doctor she’ll be, Smith isn’t sure. But she was inspired after studying under Dr. Nadine Caron, Canada’s first female First Nations general surgeon and an assistant professor of surgery at UNBC’s Northern Medical Program in Prince George. Dr. Caron is a surgeon who frequently interacts with rural populations on a deep level. Smith says that before Dr. Caron, “medicine seemed cold and extricated from community to me. But she’s so open and goes out of her way to really reach people!”

Whichever path Smith chooses in the SMP, she intends to eventually serve Indigenous and other people in rural communities. “There’s a lot of opportunity to do so much there. Dr. Caron has taught me that you can integrate community with the practice of medicine. And I really value that.”